When I began chasing my 50 after 40 goal in 2009, I quickly discovered that the stronger I became, and the more healthy I stayed, the better I performed on race day.  "Strong" for me meant not only adding in quite a bit of cross-training and weights on off days, but also lots and lots of mileage.  And as a result, I've found that typically 300 mile months during marathon training result in Boston Marathon qualifying races.

Some people can run a Boston Marathon qualifying time by simply lacing up their shoes and entering the local race.  I can't!  Even though I'm probably a little speedier than most, I still have to work my butt off to BQ.  Out of 31 marathon's, I've only qualified for the Boston Marathon seven times.  But as I wrapped up my eighth ever 300 mile month on Sunday with 303 miles in August, I looked back at some previous monthly totals to find out if the higher mileage totals equated to better race results.  Here's what I found ... 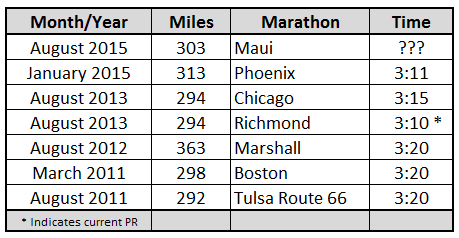 In six of my seven Boston Qualifying marathons, I had one or more training months where I logged 290 miles or greater.  And in the seventh - Top of Utah, not listed above - I ran 270 miles a few months before the race.  The data would appear to indicate that high mileage totals equate to Boston Qualifying times ... for me at least.

Now, does 300 miles in a month automatically mean a BQ ... not at all.  There were a few months when my mileage totals were huge, nearing 400, and I simply ran poor races.  So it's definitely not a given.  But usually 300 miles of running in a month builds a certain toughness, both mentally and physically for me.  And it's been my experience more often than not, it helps get me over the hump in those final miles of 26.2 when I want to dial it back or quit.

The high mileage is not for everyone.  And it's not easy.  I incorporate a ton of supplemental workouts to strengthen support muscles to keep me healthy as my body absorbs all of the pounding.  And certain training plans, like the Hanson Method, operate counter to this idea by greatly reducing mileage during training.  But what works for me, is bulking up on the miles so that on race day, there is no doubt in my mind that I'll finish, but rather how fast.  And hopefully with all the miles I've ran during training this Summer, fast races are awaiting this Fall too.
... Be Great Today!
Posted by Jim ... 50after40 at 1:18 PM