As I considered my race schedule for 2015, I targeted the Plaza 10K in Kansas City as a potential PR, and definitely one of my "A" races for the year.  I love running and racing in my beloved hometown of KC, and the Plaza 10K is one of my favorites.  But while my Summer marathon training has gone fairly well, I seemed to be a little deficient in foot speed and leg turnover as evidenced by my recent disappointing 5K results.  So standing at the starting line on Sunday morning, I really didn't know what to expect.

I usually get a "feeling" the night before, or the morning of running well at a big race.  And I told Michael on Saturday night, and again on Sunday morning that I was "feelin' it".  Something just felt right and I was in a really good mental place for the run.  My weight was good at 174.  I was almost 100% healthy with the exception of two slightly nagging hip flexors.  And I had made up my mind to be happy with the results no matter what, because frankly ... we were going to be in Maui before the end of the week!!! (we have a house sitter, an alarm system, active neighbors, and cops everywhere ... so don't bother trying to rob me)

We arrived at the Country Club Plaza - a historic upscale shopping & entertainment area in the heart of KC - as the sun was coming up, and there were already people everywhere.  The race is the largest stand alone 10K in the Midwest, capped at 3,000 runners, so we expected a little trouble parking.  But we found a great spot about 200 yards from the starting line up the street from Cheesecake Factory, which made everything convenient.

Michael was running with our friend Joceyn, who she exchanged texts with and met up later.  I headed out to my two mile warm up, followed by a few short sprints.  During my warm up, I found my friend Isaac, who I've trained a little with this Summer.  Isaac is a 20 something elite level triathlete who has won events, and really pushed me in our last speed workout.  It was great to see him, but I didn't run with him.  After the National Anthem, and a few short announcements, the gun sounded and we were off.  The race started exactly at 7:30 a.m., and my typical pre-race nerves seemed to firmly in check.

I'd planned on taking the first mile slow, probably around 6:30, just to get loose and find out if my pre-race "feelin' it" prediction felt doable.  As we wound down Ward Parkway, westward out of the Plaza, I felt pretty good.  The weather was certainly helping.  After a summer of suffocating hot and humid runs, we were blessed with a beautiful 55 degree, 73% humidity morning for the race!  We couldn't have asked for better running conditions.  And as we approached the marker at Mile 1, my Garmin chirped and vibrated with a 6:32 result ... almost exactly where I planned on being. 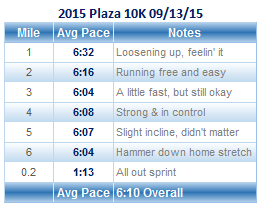 As we rounded the mile marker and headed back East to make another pass through the Plaza, I noticed my fiend Isaac, and another friend from my hometown of El Dorado, Springs - Tim, about a quarter mile ahead of me.  As a rule, I NEVER race other runners.  Race times are simply a personal thing, and who really cares who is faster than whom ... this is just for run, right?  But knowing they are both very good runners helped me gauge my tempo, and basically ... I was feeling GREAT!  So I decided to pick it up a little in the second mile.  Mile 2 of the Plaza 10K has a couple of very short hills.  One is on 47th Street as you make the turn toward the J.C. Nichols Fountain, a Kansas City landmark.  The second is directly in front of the Nelson Atkins Art Museum.  I handled both with ease and don't remember ever changing my stride with the inclines.  Somewhere during the second mile, I passed Tim, and we exchanged "good lucks".  By the end of the second mile, I'd picked up the pace significantly and checked in with a 6:16 that felt completely free and easy.

It was somewhere during Mile 3 that I started really mulling over the thought, "Today might be my day!"  From running this race in 2013, and also training on the course from time to time, I knew there was a long, straight, slight descending down hill stretch over the next two miles.  In 2013, I'd ran them in a matching pair of 6:10's, and as I briefly tested that exact pace on Sunday ... it felt completely reasonable.  In fact, with the incredible 55 degree weather, just a tick faster felt absolutely in range.  I can't begin to explain just how in complete control I felt over this stretch. I was gliding with strong and powerful strides.  My form felt perfect.  And I was bubbling with confidence.  As a result, I passed the Mile 3 line with a 6:04, and a 6:08 at Mile 4.  I'd passed a ton of runners and I was moving at a pretty good clip for me.

Just before you begin the fifth mile, you make a turn back West again, as you're about two miles from the heart of the Plaza at the Highway 71 ramp.  And during Mile 5, it begins to get a little real.  If you've gone out too fast in the 10K, this mile hurts!  You get most of the climb back from the two miles you just enjoyed floating down.  And if you're not ready for it, it can take you by surprise and be a real challenge.  In 2013 this was a real stumbling block for me, but on Sunday, I felt like an absolute "BEAST" (as my son would say).  I climbed the rolling hills adjacent to the University of Missouri Kansas City campus along Brush Creek, with little or no problem.  It was in this mile that I finally caught up to Isaac, and told him to keep climbing, focus, and finish strong.  I grabbed a quick mouthwash of Gatorade, and soon after tripped the Mile 5 wire with a 6:07 ... 13 seconds faster than I'd ran the mile in 2013!!!

When I saw my Mile 5 time, the thoughts of a new PR definitely began to dance in my head.  I was afraid to think about it too much because at 6:32, the first mile was a little slow, but I knew with a strong finish, I might be close.  So I locked in, and tried to maintain the current pace.  There's another little hill that runs by the UMKC Soccer Stadium headed South on Oak Street, that on any other run would be no trouble - but in the final mile of a 10K, it gets your attention. But it's very short, and as you round the corner, and head back North toward the Plaza on Brookside Boulevard, it's almost all downhill to the finish.  I couldn't help but glance at my Garmin as I made the turn and headed downhill.  It was reading 5:45-5:50 - which is a blistering 10K pace for me - but I'd slowed a little on the short hill and knew the final average pace for that mile would be a little slower than that.  And as I made the final turn back onto Ward Parkway where the race began, Mile 6 resulted in a 6:04.

I had a quite a bit left in the tank, and at that point I could see the finish line clock which had just clicked 38 minutes.  With a strong push, I was definitely going to PR.  So I started sprinting and averaged a 5:40 pace over the last .2 mile for a personal best finishing time of 38:20 ... and a 6:10 average pace!!!  And as you can imagine ... I was elated!!!  I think I pumped my fist or something dumb as I crossed the line ... and even though I was out of breath, I was bursting with excitement!!!

After meeting up with my friend Isaac, and chatting with Tim for a few minutes - who both PR'd on Sunday as well - I checked out my finishing time at the results tent.  I knew this was a large race with about 3,000 runners, that always draws a lot of elite runners, and elite older runners, so I didn't even expect to place in my Age Group.  But when the volunteer handed me the grocery store receipt type of print out, she said "Congratulations, you were first in your Age Group!"  Bonus!!!  I was really surprised and really happy again!!!  After that I tracked down Michael and we exchanged stories from the race, and then pointed the car toward a big breakfast back in Lee's Summit.

Running's kind of weird sometimes, in that PR's sometimes come when you least expect them.  In no way, did I expect to run this well on Sunday.  I mean, I've been training really hard for the Maui Marathon, which is only seven days away - but I just didn't think I had this kind of race in me.  But sometimes everything falls into place, and you run really well.  Sunday was one of those days.  At 46 years old, I've never ran 6.2 miles faster ... and even though it was completely unexpected, it felt really really good!
... Be Great Today!