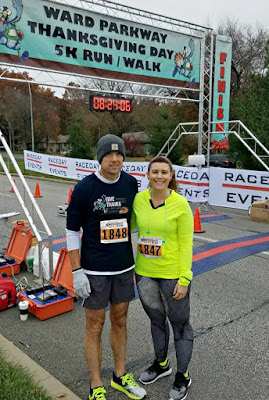 Michael and I ran our annual Ward Parkway Thanksgiving Day 5K in Kansas City on Thursday.  It's a really fun way to start of the holiday and make a preemptive strike at all the calories later in the day.  It's held at the Ward Parkway Shopping Center in Kansas City, a favorite of ours for movies, and has become our family tradition over the past 6 years.

Typically, the race is organized very well with easy packet pickup and race day coordination.  And both of those were their typical well organized selves.  However, the actual race organization was a bit of a disaster.

The 5K and 10K started about 100 yards apart from each other with the the 10K runners in front of the 5K'ers.  However both races started on the same gun. This meant that the 5K runners in the front of the pack quickly ran up on the 10K runners who had barely moved yet.  This forced the 5K runners, in an attempt to keep an pace at all, to run off course to the grassy and treed median.  There were people running into each other, darting back and forth, avoiding trees and tree branches, though unmowed grass ... total chaos for the first half mile of the race.

After that, things settled down for the remainder of the race ... for the faster 5K runners.  For everyone else, there was more congestion, and confusion.  The 10K runner had to make two loops on the same course, which meant the faster runners soon ran up on the slower 5K runners, forcing them to take the same off course approach as the 5K runners earlier.  Since it was a holiday race and no one was trying to break a world record or anything, it wasn't the end of the world.  But I was really surprise that more thought didn't go into having two different races on the same course starting at the same time.  I mean literally, everyone at the starting line of the 5K was looking at the 10K runners and talking about how we were going to get around them.  Hug fail as far as the actual race ... but the rest of the race was top notch as always.

As for my race, it went REALLY well.  I hadn't ran a 5K in a while and had a goal of sub 20.  But the main thing was I didn't want to stress my legs too much, or feel like crap the rest of the day.  So I basically ran the first two miles at a very conservative and somewhat comfortable pace.  I chatted with a couple of runners I saw that I knew (mainly about the disaster start), and really tried to back my pace off until the third mile.  The result was a 6:30, 6:22, and 6:22 ... which I was really happy about ... especially considering the last mile is a 100 ft climb, with a slight decline toward the finish line.

Overall the race was a complete success as I ran sub 20 with a 19:43, felt great afterwards, and enjoyed an awesome Thanksgiving dinner!  We'll continue to run the Ward Parkway race as long as they have it, but hopefully next year the race organizers will think through and plan the two races a little better.
Posted by Jim ... 50after40 at 12:58 PM