April 24, 2010
Louisville, KY
5th Marathon Completed
Overall Experience ... 4/5
Quick Summary
In a word, I LOVE THIS RACE!  To be fair though, Louisville, KY is one of my favorite cities.  This two-state race of Kentucky and Southern Indiana features a flat course and a beautiful tour of the city.  But probably the coolest thing about this course is that you get to make a lap around the inside of Churchill Downs, the home of the world famous Kentucky Derby.  YOU ARE LITERALLY RIGHT WHERE THE HORSES RUN! This race is held the weekend before the Kentucky Derby.  It's one of the big events the kick off the festivities for the week.  There are festivals everywhere and a great balloon race, that was unfortunately canceled because inclimate weather when I was there.
The people of Louisville are so nice with a Southern-style charm and warmth.  And the fans along the course of the race displayed this same attitude and support.  From the wonderful and well organized packet pickup and expo, the great long-sleeve technical t-shirt, the classy medal featuring a Thoroughbred horse,to the great finishers coral area, this race is top notch.  There were very few problems or glitches, and I would definitely run this one again. 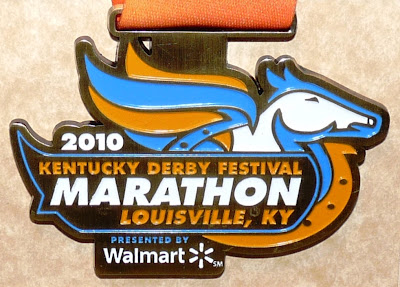 Louisville, Kentucky
Louisville, KY might be my all-time favorite city in the United States, and I just might adopt it as my honorary hometown.  There are so many things to love about Louisville.  Tons of history.  Great metro area.  And home of the world famous Kentucky Derby.

Among other things, Louisville is known as the hometown of Muhammad Ali.  The Muhammad Ali Center is a great historical and cultural museum featuring everything about the boxer's life.  It's one of the landmarks you immediately notice as you enter Louisville from the West on Interstate 64 along Kentucky border on the Ohio River.

I'm a huge baseball fan, and the Louisville Slugger Museum & Factory are a must for an fan of the game.  The museum features several actual bats and pieces of euquipment used by many of the greats of the game including Babe Ruth and Mickey Mantle.  It's like a walk through baseball history.  But the actual factory is my favorite.  The guided tour takes you through the step by step wooden bat making process, from picking the wood to applying the final finishes and fire branding.  If you don't like baseball, it might not be that interesting, but it's always one of my favorite stops while I'm in Louisville.

There also are a ton of great restaurants, sidewalk cafes, shops, and the beautiful University of Louisville campus as well - all within walking distance of your downtown hotel.  Louisville is also very easy to navigate.  Located on the banks of the Ohio River, it is easily transversed by Interstates 64 & 65. Louisville literally features something for everyone in the family.
Lodging
I almost always stay at the Hampton Inn Downtown while in Louisville.  Like all other hotels, they hike up the rates for the marathon weekend, but I was able to use my Hilton Honors Points and stayed for free, which was great.

The Hampton Inn is easy to get to from the Interstate, and close by everywhere I needed to be.  It was literally about 3 blocks from packet pick-up, 2 blocks from shuttle pick-up, and 8 blocks from the finish line.  I wish it had been closer to the finish line, but any hotel within walking distance is fine after a marathon.  Walking 8 blocks was pushing it for me though.  I must have looked like a zombie in a Michael Jackson video walking down the street with stiff legs after the race.  I was pretty worn out and a closer hotel would have been great.  But it was close enough that I didn't need a cab or shuttle, so I just hobbled down the street.

The Running Wild Expo is held at the Kentucky International Convention Center.  There was nothing that stood out as super-great or different about this expo.  Mostly it was the standard run of the mill pre-marathon health & fitness expo, but it did seem very well organized, and the volunteers were all really friendly. 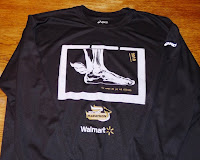 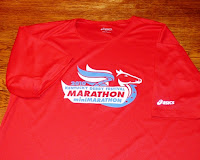 I think there might have been  a door charge of $9 for non-marathon runners, but I don't remember paying anything to get in.  It was most likely included in the entry fee for the race.  All of the typical vendors were there and it really didn't seem that crowded with people.  So it was quick and easy to get in, get my packet, and then get back to the hotel. When I'm at a race expo, I can never remember if I get a finisher shirt or not, so I usually end up buying a t-shirt at the expo. At Louisville, I bought a red short-sleeve red technical shirt with the 2010 Kentucky Derby Logo.  Pretty cool!  We also ended up getting a black long-sleeved technical shirt at the finish line.  To date, it's one of my favorite race shirts.
Shuttle Buses
If you are an out-of-towner, you basically have to take a bus to the starting line.  The race begins at Iroquois Manor Shopping Center, a small center on the outskirts of downtown Louisville.  The race coordinators made shuttle pickup very easy.  The buses ran about every 15 minutes and I didn't feel rushed or panicked at all about catching one.  As with most races, they use local school buses to shuttle the runners to the starting lines.
Course
I loved this fast-flat course.  You are shuttled from your hotel to Iroquois Manor Shopping Center where the race starts.  Actually the first and last few miles were the only "challenging" elevation or hills.  The first five miles of the race are through Iroquois Park.  The park is a rolling hill tour of a beautiful hill-lined trail.
The next point of interest is the lap around Churchill Downs.  So far, this is one of the highlights of my running career.  I'm not a horse racing fan, but to run along side the historic track was incredible.  Runners don't actually run along the dirt track, but rather the paved area just on the inside of the track.  But while I was running my loop around the Kentucky Derby grounds, there were several Thoroughbreds doing workouts on the track.  AMAZING.  Those animals are huge!  And phenomenal athletes! 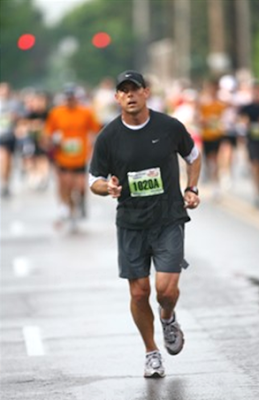 After exiting Churchill Downs, you run by the University of Louisville campus.  There were signs hanging from the frat & sorority houses supporting the runners.  Several of the students also had "free beer" stands, which was kind of funny.  Cardinals logos everywhere.
The next, really interesting area was the Cherokee Triangle area.  There was an art fair being held at the same time and there were several art exhibits and tents around this "artsy" part of town.
As we made our way back toward the down-town area, we passed through a huge group of supporters gathered at about mile 20.  They were very energizing and supportive.  I needed it, because what came next was my least favorite part of the race.  The out and back over the Ohio River Bridge.
The Ohio River Bridge takes you over the Ohio River and into Jeffersonville, Indiana.  This was the first time in a race I had ran through two states - pretty cool.  What wasn't cool was crossing the bridge twice.  It was definitely the most challenging part of the race.  Going over the bridge at mile 21 was hard enough, but then coming back over it at mile 24 was next to impossible - for me anyway.
Once you make it back over the bridge, you are on the home stretch.  The ONLY bad thing about this race was at mile 25.  The race organizers had the runners and walkers (of the half marathon I presume) finish in the same area.  There were walkers everywhere.  It was VERY difficult to determine who was walking in the race, and who was walking as a spectator.  Because of this, the course was a little hard to follow, which is not what you want in the final stages.
However, the last half mile was fantastic.  The supporters were very vocal and supportive.  I had a great time and really enjoyed the course!
Spectators
There were a ton of people all along the course and they were wonderful.  At almost every turn, people were offering fruit and water.  The downtown finish area was one of the best I have ran in.  There were people at every street corner and they were wonderful.   Probably the best spectators I have experienced.
Post-Race 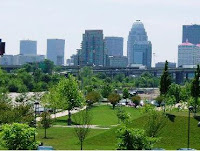 Waterfront Park, on the banks of the Ohio River was a wonderful area for the Post-Race finisher's coral and awards ceremony.  It was large and runners didn't feel crowded or like they were being rushed out.

There was live intertainment and several recovery tents.  In your race packet, the organizers also gave you a free beer coupon for the beer garden.  I gave mine away, but it was a nice guesture.  Great wrap-up celebration for the race.
... be great today!
Posted by Jim ... 50after40 at 5:19 PM