Spoiler Alert ... Quick Summary
My grandson was born 2 days before this race and I had spent those two days driving and thinking that I might actually miss the race.  Seeing him for the first time in Kansas City was well worth it, but I didn't have a chance to go through my typical pre-race rituals, and my race experience and results suffered because of it. 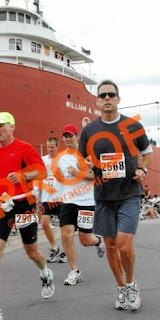 This race is billed as "World Class Event. Small Town Charm".  I think I would grade that title a B- for accuracy.  The name is fairly accurate, but it has some holes.  I probably didn't take advantage of Duluth, MN the way I could have.  And part of my less than favorable remembrance of the experience was because I had to stay in Superior, WI - pretty bad.

The race itself is very scenic, but overall, a pretty boring and uneventful course.  You basically run along a Great Lakes Highway the first 20 miles and then round it out in the town of Duluth.  The view of Lake Superior is beautiful, but there's not a lot there to occupy your mind for 26 miles.  There are almost no spectators for most of the race, but they are great at the end.  The finish area is nice with an average medal, but there were some organizational issues with shuttle buses back to the hotels.

This will surprise a lot of people who have ran this VERY POPULAR RACE - but honestly, considering the complete package of race, location, and organization ... it's probably my least favorite so far ... I only give it 3 out of 5 stars. 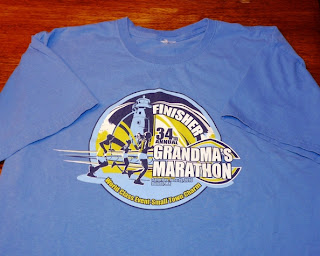 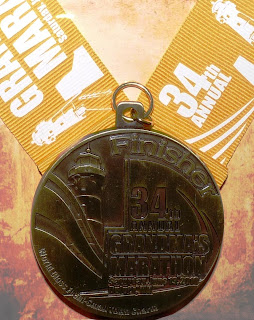 Duluth, MN
I try very hard not to write negative things about marathon host cities.  That being said, Duluth, Minnesota was not one of my favorites.  It just wasn't what I was expecting.

It was a nice blue-collar port-town, with great people, and a beautiful view of Lake Superior, but I found it VERY hard to navigate ... and I drive to new places for a living!  Part of this was because Interstate 35 was under serious construction and several exits that I needed to access were closed or simply didn't exist.  That being said, the Grandma's Staff did a great job of sending out email alerts about the traffic confusion - but it seemed they weren't very helpful. 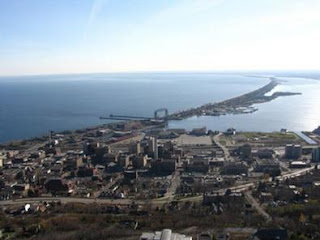 Duluth is billed as a great camping and resort town, and it probably is.  But if you're not there for that, there doesn't seem to be a lot to do.  There are the typical local landmarks that all cities and towns have, but nothing I found to be overwhelming.

Lodging
This was another issue.  If you are going to run this race, get your lodging EARLY!!!  All of the "reasonably priced" hotels are booked about 9 months in advance.  This is one of Duluth's main events of the year, so the area hotels really hike up the rates during this weekend.  Expect to pay at least twice or three times, in some cases, the normal nightly fee.  I ended up staying in Duluth's sister-city, Superior, Wisconsin because of this.  Again, I'm sure Wisconsin and it's beautiful cities are great - but Superior, WI is really not a great place.  It features dozens of "townie" bars.  And not the cool "townie" bars that are fun to visit and give you a taste of the local flavor.  The kind of "townie" bars that all of the factory workers gather at while giving you the stink-eye when you walk in. 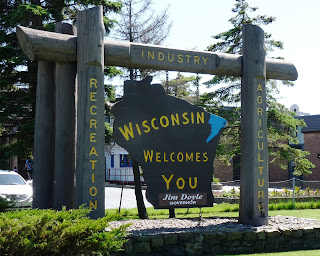 I stayed at Superior Inn.  Do not stay there unless ALL OTHER OPTIONS ARE EXHAUSTED.  The staff was pretty friendly, but the rooms are like time-warping back to 1962.  They didn't really appear that clean either.  It was the kind of place where they say "One key or two" ... and they literally give you a giant metal key.  But it was fine for two nights.  It was warm, had a roof, and no wheels ... so it beat sleeping in my car.

Packet Pickup & Expo
This was one of the bright spots of the marathon!  Very nice expo with GREAT speakers.  Kara Goucher and Dick Beardsley to name a few.  (If you've never read Duel In The Sun, by John Brant, about Dick Beardsley & Alberto Salazar and the 1982 Boston Marathon, definitely pick it up ... great read!!!)  Also, they had a great spaghetti dinner the night before - one of the best I've seen.

You have to pay to park at the Expo Center where the event is held. They might have validated parking inside, I can't remember.  But the center was right on the Port of Duluth and very scenic.  During the expo, they also offer bus tours of the course, which I didn't go on - but it was a nice extra.

Shuttle Buses
Everyone has to take a shuttle bus (several local school buses) from their hotel to the starting line.  The first half of the course is about 20 miles from Duluth in Two Harbors, MN, and there are several loading areas at various hotels. 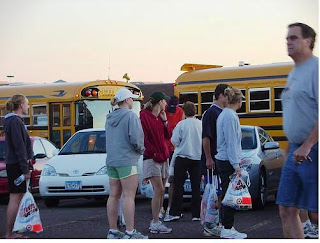 If you're running this marathon, make sure you stay at a hotel that is also a shuttle stop, or at least withing walking distance to a shuttle stop.  I stayed at a hotel with a shuttle stop about 200 yards away, so no big deal.  As with most race shuttle buses, you have to have your race number to board the bus.  Only racers are allowed on the buses.

Port-a-Potties
This doesn't affect women, but it you have take of pre-race business, you can only use the designated port-a-potties.  There are several race officials around at the start, and I saw several people (not me) get lectured for trying to pee behind a tree.  Two Harbors is a National Forest and they take it pretty seriously.

Spectators
There are only 3 or 4 places spectators can gather besides the streets of Duluth.  Miles 5, 9, 12, & 16  come to mind.  There were a handful of spectators gathered at these locations.  I thought there would be more based on the size of the race - about 10,000 half and full runners.  It makes the first 75% of the race a little boring.

Course
The course is VERY FLAT.  It was really not challenging at all.  The first 20 miles are beautiful and there is a great view of Lake Superior constantly on your left-hand side.  They really frown on running off of the course to pee - so hold it until you get to a port-a-pottie.  Adequate hydration tables were set up and the volunteers were GREAT!!! 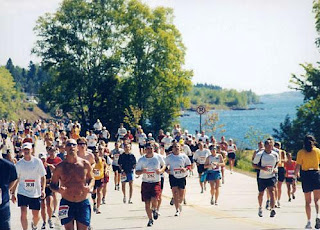 The Port of Duluth is the finish area and is so huge you can almost see it from the starting line.  BUT IT IS AN OPTICAL ILLUSION!!!   Keep in mind you are still 26 miles away.  Several people I talked to thought this was great.  Other people hated the constant reminder of how far they still had to go.

Once you arrive in Duluth, there are the typical fans at various corners - but honestly not as many as I thought there would be for such a highly touted race.  In the final stages, you wind through the streets of down-town and end up in the Port of Duluth area.  This area was pretty cool.  You run through some old brick streets with bands playing and crowds cheering.  At the end of the race, there was an enormous ship docked in the port which was pretty cool.

Post-Race
This race featured a great finishers coral with great food, medals, and conversation with runners that had just finished.  I was a little distracted after the race for personal reasons (the birth of my grandson), and I couldn't find the shuttle locations back to the hotel.  But I wasn't the only one - several of us had trouble finding where they were parked - which is not a good thing when you are tired and want to sit down.  We asked several volunteers and none of them had any idea.  There weren't any signs that were evident and we ended up walking close to a mile looking for the stupid buses. Once we found them, we waited about 45 minutes for them to leave.  Probably about 1-1/2 hours elapsed from the time I began looking for the shuttles until I got back to my room. So that experience wasn't great.