This weekend my daughter Madison, and my wife Michael of Slowly Tri-Ing, are running the Oklahoma City Memorial Half-Marathon in Oklahoma City, OK.  It's Madi's first Half-Marathon EVERRR!  And Michael's third - so we're all pretty pumped.  (I'll be running with them too.) 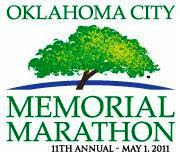 So we've been thinking a lot about what to eat in the days leading up to the race.  And last week Coy Martinez of First In Philly suggested that I write a blog about what I eat before a race.  And well, I'm nothing if not influencable ... so here' goes!

Carb Loading
In things that I've read (and experienced first hand), one of the mistakes people make before a marathon is OVER-CARB LOADING.  We are all ultra-conscience of getting enough carbs befor the big race and often we totally change our diet, stuffing our faces with every carbohydrate filled goodie we can find.  As a result, on race day we are a few pounds heavier, and feel bloated & poop-filled (need evidence ... um, check out the line of porto-potties before the race ...  not many things worse than the wafting of carb-filled excrement!!!).

The truth is, there is a lot of debate even to this day about carbo-loading before a  marathon.  Old-school runners rarely loaded up the week before a marathon, trying to get skinnier and lighter at the starting line.  In 2005, the Marathon Directors College said carbohydrate loading has been dropped by most serious marathoners. You should eat a normal diet with 60-70% carbohydrates the week before the marathon, but do not increase your total calories http://walking.about.com/od/marathontraining/f/carboloading.htm

In November of last year I wrote to Sports Dietion Jackie Dikos, a 2:45 Olympic Marathon Qualifier at the 2010 Indianapolis Monumental Marathon, and asked her about carbo loading.  You can read the article on her blog here ... http://nutritionsuccess.org/blog/2010/11/disappointed-because-i-usually-hit-the-wall/  Jackie was very kind and helpful in giving me a little pre-race meal advice that I have used with great success in the two marathons following Indianapolis.

For my first eight marathons, I would slowly add carbs all week, and then eat everything in sight the day before.  It led to the above mentioned condition, and my stomach never really felt great before the race.  Following Jackie's plan, I now do the majority of my carb loading two days before, and then eat fairly sensibly the day before the race.  It has worked wonders.

So here is what I typically eat for a Saturday race ...

Monday-Wednesday
Eat healthy, normal meals, usually about 2300 calories... not carbo loading at all - try to stay relaxed and don't do or eat anything out of the norm

Thursday
Breakfast ... lots of fruit, namely strawberries, blue berries, an orange and banana & wheat toast, yogurt, 3 egg
whites, and maybe dry oatmeal
Snack ... smoothie if available with whey protein or almonds & another banana & saltine crackers
Lunch ... usually pizza and some fruit
Snack ... protein bar (I know I'll hear from Jason of  Cook Train Eat Race on this one) & more crackers
Dinner ... chicken pasta with brown rice on the side if I can get it, broccoli or brussel sprouts
Snack ... pretzels or more crackers & an apple
Calories ... aprx 3300-3500
Note: I also usually drink a lot of Gatorade & as much water as I can hold

﻿
Saturday
Breakfast ... Banana & protein bar when I first wake up aprx 4 hours before the race
EXACTLY 1/2 hour before the race ... I'll eat a Power Bar C2Max Carb/Protein bar for a last shot of race energy
Post-Race ... EVERYTHING I CAN GET MY HANDS ON!!!

So that's what I do.  The only two things that are a little out of the ordinary are aprx 5-6 bananas, and pizza ... but hey, pizza works for me and is my good-luck charm! And here's the usual disclaimer ...  THIS IS ONLY WHAT WORKS FOR ME!!! Obviously you should practice and do what works for you before a race.  I never cramp and usually don't hit the wall anymore ... which I attribute mostly to better training and pacing, but also improved diet.  The biggest difference I've noticed by adding the carbs two days before the race is that I don't feel so bloated and loaded down at the starting line.  Eating less the day before also just seems more normal.

Hope this is helpful!  But again, I can't stress enough practicing what works for you before your long runs and simulating "race day" as much as possible.  Best of luck with your pre-race nutrition!
... be great today!
Posted by Jim ... 50after40 at 7:06 PM