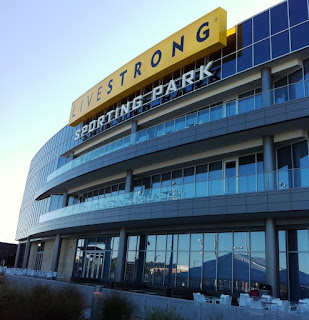 What an unbelievable Saturday morning in Kansas City!!!  Michael and I ran the first ever Cerner Kansas City 15K, and it could not have been more beautiful ... 52 degrees, sunny, no wind ... perfect!!!

The race was held near the Legends Shopping Center in Kansas City, Kansas, which is adjacent to NASCAR's Kansas Speedway & also LiveStrong Sporting Park, the home of Major League Soccer's Sporting Kansas City - KC's pro soccer club.  The race also finished on the floor of the stadium which was really cool.  I'm  not a big soccer fan, but this stadium, which is only about a year old, is unbelievable ... so beautiful!!!

It was also the first time either of us had ran a 15K race (9.35 miles), which was sponsored by Cerner, a Kansas City based international health care information technology corporation.  It seemed like the perfect race for both of us since I typically run about 10-12 miles per day with the exception of long runs on the weekend, and Michael was about at the 9-10 mile point in her marathon training.

However, the weekend didn't start great for me.  All day on Friday, and most of the week, I had some pain in my right ankle - enough that I started to wonder if it would affect the race on Saturday. I really thought that I was beginning to see some of the wear & tear from pushing myself a little too hard during my training.  And it kinda got me a little down.  I was bummed because I had looked forward to this KC 15K for a while and really wanted to finish under 1 hour.  But as the race got closer, my body just wasn't up to it.  So on Friday night for my pre-race meal ... I said "screw-it" and had a double cheeseburger, waffle fries, and a Dr. Pepper from BackYard Burger.  I followed that up with a Peanut Butter & Jelly Sandwich, and cookies at home. Great thinking from this idiot!!! I mean that's the universal pre-game meal of champions right?

I decided to just "wait & see" how it felt on Saturday morning.  I knew that I wouldn't be able to run my fastest race, but if I didn't have any pain while running - I would just turn it into a "quicker than average paced" Tempo Training Run. But on Saturday morning, there was still a little pain and I told Michael before we left home that I wasn't going to kill myself with this race.  My legs just didn't feel race ready - which I guess was understandable since I just ran my 3rd fastest marathon 13 days ago, and I had ran 56 miles so far this week.  The bigger goal was back-to-back  marathons in three weeks and I didn't want to injure myself before those.  So I would "dial it down a notch or two" today.

When we arrived at the LiveStrong Sporting Park, my stomach was already churning a little.  It "might" have been all the crap I ate the night before, but I can't be 100% certain about that.  After visiting the outdoor potties, I was ready to go!  I noticed from walking around that my ankle was beginning to loosen up quite bit, but I still had every intention of slowing it down a little today.  There was no need to run this race like a fool and mess something up for a few weeks down the road.

It was perfect running weather, and when the race started, my legs actually felt better than anticipated, with a little bounce and not quite as dead as they were at home.  During the first few miles, I really held myself back quite a bit, trying not to get too wrapped in race adrenaline ... but it was tough.  Every few steps, people were flying by me on both sides.  This race was a little hilly - but not a killer ... just a lot of long gradual rolling hills that took a little focus.  Throughout the race, I felt smooth and fluent and never really had any pain except for my right hip ... which came out of nowhere???  That went away though.  Thankfully my right ankle, which was a nuisance earlier in the week, was not an issue at all.


About six miles in, I felt GREAT!!!  I seemed to be passing quite a few people as my pace picked up a little... and most of them were really laboring on the hills.  Fortunately I wasn't having too much trouble.  And I started really feeling like I was running a decent race - even though it wasn't a MAX effort.  I had crossed the starting line earlier knowing that there was NO WAY I would place in my age group - but as I gradually picked off runners, I started trying to remember how many "older guys" I had seen in front of me.  At mile 8, I came across one of the last guys my age - but he was running pretty fast.  At that point my competitive juices finally really kicked in and I sped up a little and was able to pass him at about 8.5 ... turns out he was 40 and finished right behind me in our age group.

The only time I really pushed it a little was during the last 1.35 miles.  I ran mile 9 at about 6:20, and the last .35 mile at 5:58 ... but really felt fine at that pace.  The only problem was my stomach was really churning from my genius sabotage plan the night before with the burger and fries.

As I crossed the finish line I was very satisfied with my run.  I hadn't killed myself.  I had held back a little.  And I didn't feel like I had over-stressed anything at all!  All in all it was a success, but I knew there was no way I placed in my age group based on my effort, which was fine!


After getting a really cool pint glass for completing the race, I rounded up some water, an orange, and a bagel and waited for Michael to cross the finish line.  I also stopped by the results table to find out if my Garmin matched their results.  When I got the results, sure enough, they both said 1:04:14 ... but the printed out sheet they gave me also indicated I was third in the 40-44 Age Group ... I was friggin' thrilled!!!  I had actually placed!!!

After Michael finished, we waited around for the Awards Ceremony to get my "bronze medal".  The race official announced the third place winner ... it wasn't me.  "That's odd", I thought.  He then announced the second place finisher ... it wasn't me.  In fact, it was the 40 year old I had passed at mile 8.5.  Michael then looked at me and said, "That means you won!!!"  And sure enough ... the race guy then said, "First Place ... from Lees Summit, Missouri ... Jim Weatherly!!!"   I was shocked ... but it was awesome!!!  Turns out the results table was wrong and I had actually won my age group.  It was an awesome surprise!

Now, I'm not naive enough to think I'm a super-fast runner or anything - I just I was lucky that there weren't a lot of super-fast people in my age group.  But it was pretty cool getting first place, even it was pretty lucky.  And out of the other races this year that I have been fortunate enough to win my age group - I think this one was the most satisfying.  I had stayed withing myself and ran my game plan, and for some strange reason was fast enough on Saturday.

Michael's Day
I won't reveal too much about Michael's run today ... you can read the full story on her blog, Slowly Tri-Ing ... but I can tell you that she's never ran better than she did today!!!

I was so unbelievably proud of her ... and her day overshadowed anything success I was fortunate enough to experience.  She ran like a champion and set not one ... not two ... but three PR's in the same race!  Amazing!!!

After I finished I sat in the stands waiting for her with an approximate time of when I thought she would finish.  I was just chillin' when all of the sudden, here comes Michael into the stadium ... ABOUT 10 MINUTES SOONER THAN I EXPECTED HER!!!

I  quickly fumbled for my camera and I got a really grainy picture of her crossing the finish line, but it wasn't great since it was from my iPhone from a long ways away ... but you can definitely tell it's her.  After the race I couldn't stop telling her how proud I was of her.  She of course asked how I did and I told her, okay ... but I couldn't contain my excitement for her.  She has worked so hard and fought through some injuries to do what she did today ... and it was really her day!!!  I couldn't be prouder!!!


These past few years, I've been very blessed to experience some great fun, and a little success along the way with running.  It has brought me a lot of joy and became a huge part of my life.  And it's taken my family and I all over the country just doing what we love.  But from start to finish, few days compare to this one.  It was amazing!  Watching Michael cross the finish line as fast as she did was so awesome.  She was literally beaming, and had a smile and bounce in her step I could see all the way from seat in the stands.

It was one of the funniest things I've ever seen, but when she crossed the finish line, she threw her hands in the air, and just kept running for about 50 more yards ... like she had energy to burn.  SHE DIDN'T STOP!!!  Everyone else was bent over tugging their shorts or walking slowly with their hands on their hips ... but this girl still had a bounce in her step!!!  Just smiling, laughing, and enjoying her greatest running moment ever!

We spent the rest of the day just enjoying our time together and shared little details about our race with each other.  Frankly, I couldn't care less if we talked about my race at all ... I was just happy to hear all about hers. 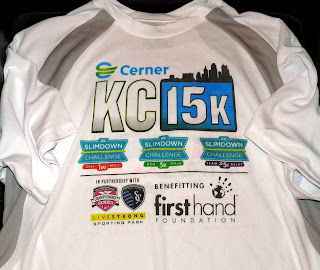 As we drove home from the race, we were both a little tired.  I was obviously very thrilled with the race I had run ... but more importantly, it was one more day of doing what I enjoy with the love of my life ... and that's tough to beat! She had worked so hard and was so proud.  And it was so amazing to see the rewards of her training ... and she earned her 3 PR's on Saturday!  I'm so proud of you baby!  It's funny, I hadn't really gone into Saturday thinking this would be such a wonderful day, but it will be one we both will remember forever.  The weather was perfect!  I was with my beautiful wife!  And we were fortunate enough to spend some time together doing what we love.  Today was a great day!  Hope yours was too!
... be great today!