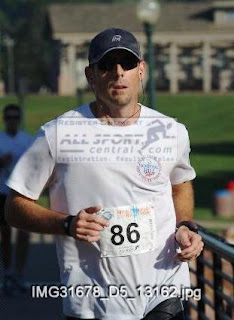 Sioux Falls Marathon
September 11, 2011
Sioux Falls, South Dakota
13th Marathon Completed
Official Time: 3:21:15
Avg Pace: 7:41
Avg HR: 168
Finish: Overall 40th out of 354, 5th out of 45 40-44 Age Group
Weather: Starting Line - 62 degrees, 88% humidity, 3mph wind ...
Finish Line - 78 degrees
Comments: Good run, 3rd fastest marathon to date ... a little disappointed, really planned on a PR
Garmin Connect Link:  http://connect.garmin.com/activity/113815167
Overview
I went into this marathon not just hoping, but planning to PR.  I had trained pretty hard all summer and was looking forward to a nice cool & fairly flat marathon to set my personal record at.  In fact I was so confident, that I announced on a blog post two days before the run ... "PR WILL HAPPEN"!  But I missed that projection by about 40 seconds.  I ran a good race, just not as fast or strong as I had hoped to run ... all in all, it was a good run and my 3rd fastest marathon to date.

Race Weight, Nutrition, & Conditioning
I felt fairly fit for this race, but not in the best shape I had ever been.  Lately my upper body workouts had went away almost completely, but my legs were strong and healthy. I had been running twice a day, two days a week and mixing in evening leg workouts two days a week.  Plus, on weekends, I had mixed in several back to back long runs to prep for my up coming back to back marathons in October.  Plus, with the heat of summer, I had tried to maintain a fast pace, pushing through the heat and humidity.  So overall, my legs felt strong and ready.

My race day weight was about 177 or 178 which is fine, but really about 5 pounds heavier than I want to be for running a fast race.  And recently, my diet had been marginal at best.  It seems like I had combined one or two good days of nutrition with a bad one - but not disastrous.  I just could have been a lot better.

As far as ab & core work goes, I had been fine, with about 400 crunches/week with 24 min of total planks and about 300 push ups.  But those had been really sporadic, and not consistent like in the past.  But overall, I felt good as far as my core goes.

Pre-Race
I drove to Sioux Falls on Saturday morning and arrived at packet pick-up at about noon.  It was a pretty small event with no Expo, so I was in and out in just a few minutes.  I usually drive the course at this point, but with most of the course being a closed bike path, I knew that was not possible.  So I went to see a movie, "The Debt" ... which was pretty relaxing.  After that, I just went back to the room and relaxed and felt fresh and ready.

I ate Subway for lunch and Johnny Carinos Italian for dinner ... and that's about it.  I didn't want to have too much on my stomach, trying to eliminate stomach problems.  The Italian was really garlicy which kind of upset my stomach during the evening, so I'll probably stay away from garlic the night before a race.  Other than that though, I felt fine.

Race & Pace
This race was billed as a "relatively flat" course, which I would agree with completely.  There were no monster hills and MANY long flat straight miles.  However, there were a few more hills in total than I had really planned on, but they really didn't slow me down until the end a little. 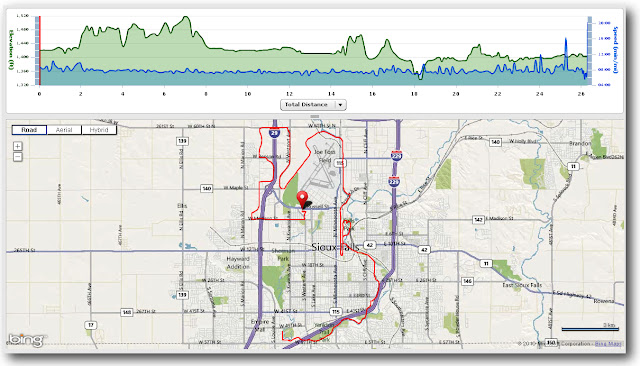 It was a little warmer than I had planned on, but nothing deadly.  It was about 62 degrees, with 88% humidity at the starting line, which felt great for walking around, but I noticed I was sweating a little too much, a little too soon into the race.  I think it was about 78 degrees at the end of the race, which is getting warm for a marathon. I really felt the heat hit me toward the end, but with what I had trained in all summer, it shouldn't have mattered.

I felt great the first couple of miles, with a ton of energy, really struggling to keep my pace down.  I ran the first 3 miles about 10 seconds faster each than I had planned, but that wasn't earth shattering.  I felt good, and my Heart Rate was in the high 140's to low 150's.  I really felt strong, like I could accelerate at any minute.

At about mile 6 I started in on my 7:30's.  They felt smooth and easy, and like I was still really struggling to keep my pace down.  I was ready for mile 10 when I was going to settle into my 7:20 pace.

For most races, I start really slow and then play catch up the whole time - a strategy that has worked well for me.  But I'm really thinking about modifying that a little, I think I might be leaving too much time on the clock to make up early in the race.

As I kept glancing down at my Garmin during these miles, I was running anywhere from 7:05 - 7:07.  I think I burned a little too much energy during this part of the race.  The overall pace for each mile being around 7:15 was fine, however I think if I would have kept the pace a little smoother, I would saved some energy for late in the race.

I had planned on starting 7:30's again at mile 20, but I was starting to really lose a lot of fluid and my pace began to slip a little.  I didn't walk, except for one water stop where I took a gel, and twice during the last two mile, but it was really tough to keep the pace.  When I would speed up, I noticed my heart rate jumping to mid 180's.  And anytime lately when I'm over 180, I seem to notice some stomach problems, so I would slow down to get my stomach under control so we didn't have an accident on our hands.  But truly, my legs still felt fairly strong, I think the deficiency was in my conditioning.

Motivation
At about mile 24, I started realizing that if I pushed really hard I might still be able to get a PR and another BQ.  And honestly, if I had never BQ'd before, I probably had it in me.  But with my upcoming back-to-back  marathons in about a month, and with no desire to BQ just for the sake of doing it again, I really fought with motivation.  Speaking of motivation, this has become a problem for me as of late.  I am still 100% motivated to complete all of my marathons.  And I still have PLENTY of shorter race speed goals to accomplish.  But at the end of races, I start asking myself "How important is a few more seconds?"  And that's when I dial it down a little.  I don't quit ... I NEVER QUIT!  But I really seem to lose a little interest in finishing fast when the pain in my gut hits me.  It's something I need to address and focus on a little more and decide just how important a PR is when I start a race.  I can't be something I just breeze through and don't have to work for.

At about 25.5 I still an outside shot at a PR, but I when you are that close, the clock really plays games with your mind.  You start to calculate over and over again just how fast you have to run to make it happen.  I thought I had it figure out.  And when I could see the finish line, I was about 1 minute under my PR, so I started to "sprint" giving everything I had left.  Problem ... the finish line was almost 2 minutes away.  But I finished strong.

I finished at 3:21:15 ... still a very good race for me, but not what I had set out to do.  But I was completely fine with that.  The bigger goal was my back-to-back marathons in October and I felt like I had run a pretty good race.

Summary
I had to go immediately to my car, shower, and get on the road back to KC as quick as possible.  I think I was on the road about 45 minutes after I crossed the finish line.  And as with all races, I examined my pace splits on the way home on my Garmin.  Could I have ran a little faster?  Did the higher temps & more hills than I anticipated play a role?  Maybe, but I will never blame course conditions on not meeting my goal.  I know I ran well that day and was not ashamed of my performance at all.  I had to "eat a little crow" after predicting a PR, but other than that ... I was a good race.
Posted by Jim ... 50after40 at 11:19 AM