Who's Controlling "Your" Run? 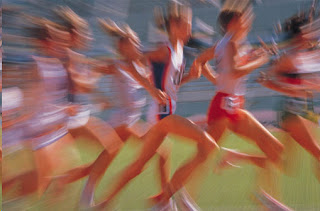 Do you  make Tempo Runs a part of your normal routine?
Do you control your pace during these workouts, or does it control you?

As avid runners and diligent training fanatics, most of us incorporate Tempo Runs into our regular routine.  And I've found that the single best marathon trainer for me, with the exception of the Long Run of course, are good solid Tempo Runs.  A difficult, consistent paced Tempo Run trains my body to operate efficiently and increases my Lactate Threshold.  It also develops muscle memory by teaching my legs what a certain pace feels like for an extended period of time. I feel like I develop more as a runner during these workouts than any other.  But the biggest problem I have with Tempo Runs is controlling the pace ... most of the time, it controls me!

For example, earlier this week I began my Tuesday Tempo workout planning to keep my pace at 7:00/mile for miles 4-11 of a 12 mile workout.  I felt really good during the first couple warm up miles, so I decided to push it a little.  The result was several miles well below the 7:00/mile pace, however ... the splits were all over the board.  I had 6:41's,  6:52's, 6:46's, and 6:55's with no rhyme or reason.  Don't get me wrong, I felt great about the workout.  I was exhausted, and I was glad I could keep my pace that fast for that long. But I'm not sure being so inconsistent during a Tempo Run is a good thing.  A Tempo Run should be ran accurately, with very little pace variation.  Two to three seconds difference between each mile would have meant I was in control of the run.  But such varying paces meant that the run was really controlling me.

During a Tempo Run, I often feel myself giving in on the hills, and increasing my pace on down hills, instead of keeping it smooth and steady throughout.  I also often run the first portion of the workout much faster than the last.  I think all this really teaches  my body to do is "push it" for a little while ... and then crash.  And training your body with this process, both mentally and physically, can be disastrous in a marathon.

I try to run most Tempo Runs about 15-20 seconds faster than my planned marathon pace.  The thought is that if I can run this faster pace for 12-15 miles during training, then a slower pace for a longer distance on race day should be obtainable.  So far it has worked fairly well.  But I really believe that keeping my Tempo Run paces closer bunched together will help me be more fluent and consistent with my pace during the marathon.  I've read that not being able to slow yourself down, as well as hold the pace, during a Tempo Run is an indicator of lack of conditioning at that particular speed.  I've found that to be true.  If you can hold a certain pace for several  miles ... you are in control of the run, and the run is not controlling you!

I have so much to learn as a runner, and so many areas where I can grow ... but one of the main "departments" I am going to focus on is running consistent paced workouts.  Regardless of the specific pace of the run, I'm going to try harder to hit those paces more on the money.   I think this will really help me predict my marathon pace a little more accurately, and familiarize me a lot more with the planned pace on race day.  Have a great weekend!
... be great today!
Posted by Jim ... 50after40 at 5:08 PM