Wow .. what a fun morning in Lee's Summit, Missouri!!! We ran the 2011 Halloween Hustle 5K and had a blast.  And besides just having an awesome time, I got to check off two of my Lifetime Running Goals in one morning.  Mile 3 of the race was exactly my 2,500th of the year ... a goal of mine for sometime now.  But most importantly ... I RAN A RACE WITH MY SON!!!  And that's something I thought would never happen.

We woke up early as usual. Got dressed.  Ate a little something. And y'all know what came next ... The World Famous Michael & Jim PRE-RACE DANCE PARTY!!!  "Michael's sexy and she knows it ... wiggle, wiggle, wiggle!"

After that, Gage's son Ryder and his mom met us at the house and we all headed out for Unity Village in Lees Summit, MO.  It was a little chilly - about 35 degrees with an 8mph breeze, so we were bundled up a little for the first time this Fall.  Michael wanted to get there early because she was going to enter in the costume contest, which they ended up having after the race.  She dressed as "Running On Empty" ... which we thought was pretty creative.  But she kinda got a lot of blank stares.  I'm not sure people got it.  I thought she just looked like sexy runner girl!!!  And even though Halloween is TOTALLY NOT MY THING ... there actually were quite a few great costumes.  My favorite was Captain Crunch.

Gage is not a runner.  I think as preparation for this race he ran a total of two miles. But don't get me wrong, he is a really good athlete.  He's played A LOT of baseball, roller hockey, and football back in the day.  But lately with work, a baby, and "grown-up" life things, a lot of the athletics have passed by the wayside.  Plus, he's never really been much into "just running".  But I think after seeing his sister, who is not a natural athlete, do so well this year with running, he wanted to give it a shot.  Also, I think he ran partly for me.  And even though I've tried really hard not to "push" my kids in sports, it really meant a lot that he would do this with me.  Really cool!

The race was sponsored and organized by Bodies Personal Training, a personal training gym in Lee's Summit featuring various physical training disciplines.  They had a really seamless sign-up and packet pick-up at their gym a couple of days before the race.  And the pre-race and post race activities were really GREAT!!!  They had a DJ with music, a bunch of games and a blow-up bouncy house for kids, a pancake breakfast at the finish, a finisher medal, Halloween Costume Contest, some local vendors and a massage table!  Plus, we got a very nice short sleeve technical t-shirt!  Really awesome SWAG and activities for such a small local 5K race.


There were only a couple of things that could be improved a little.  And to be fair, small races like this one many times simply just don't have the manpower or volunteers for all the little things required for a race ... and they do the best they can.  While all of the peripheral things about the race were GREAT, the race itself was a little long ... my Garmin read 3.4 at the end.  Plus, it was a two loop course for the 5K and four loops for the 10K.  At the half -mile out & back portion of the race, fast, slow, 5 & 10K runners were running into each other.  But those were really the only two thingsr that stuck out as "needing attention".  All-in-all it was a good event!

It was actually not a great day for Gage to be running a 5K.  He was moving into a new house on Saturday and had a lot going on.  But he had already signed up for the race, so he honored his commitment and ran anyway.  I really tried to make him take it easy with the pace. (as much as you can "make" a 21 year-old do anything I suppose)  I just didn't want him to run too fast and be totally dead the rest of the day for his move.  Plus, I honestly wasn't sure he could even run a full 3.1 miles since he hadn't trained at all.  In fact, he told me near the end of the race that he had a bet with a co-worker about being able to run the whole thing without stopping.  I think it was $10.

We started pretty slow ... on purpose.  And as we warmed up a little, he told  me he felt fine, but we didn't speed up.  There was only one little hill in this race, a half-mile 50 footer.  But to someone who never runs, it looked like a mountain.  We had been talking a little throughout the race, but a this point he got really quiet and later told me that he thought about walking at that point.  But he didn't.  He kept running the whole time.  He told me with about a quarter-mile left in the race that he was going to win his bet with his buddy about not stopping.  And at that point he began to run a lot faster.  I know with even a little training, he could have been fairly fast for a 5K.  The kid is a good athlete!  As he crossed the finish line, his time was 33:06.  And he hadn't walked at all!

After the race, we met up with my grandson Ryder, who was waiting with Cheerios, collected our medals, and watched for Michael and Gage's girlfriend's brother who ran the 10K.  They both ran good races.  I think Michael even set another PR for 3.1 ... although her official time was not a PR since the course was a little long.  We all then headed over for some post-race pancakes.  As we were standing in the pancake line, the PA announcer who was reading the results said "In the 20-24 Age Group ... Second Place ... Gage Weatherly!"  Everyone kinda looked at each other like "What did he just say???"  And then Gage was like, "I just heard my name ...YESSS!!!"  He got Second Place in his age group at his first race, and even got a Second Place medal.  He was pretty proud!  He was laughing about it saying that the guy at work was gonna owe him a 50-spot for that!  He even called his sister ... who of course was also proud of her big brother! 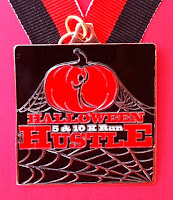 Unity Village in Lees Summit is about eight miles from my house.  So after the race I ran home to give me an even 11 miles for the day, with a 20 miler scheduled on Sunday.  The last mile of the race had been exactly my 2,500th of the year.  I was pretty excited about that too, since it was one of my long term running goals.  I'll probably hit 3,000 by year's end, but 2,500 is a one year record for me.  And even though it really doesn't mean anything other than I stayed healthy all year, I thought it was pretty cool!

But the biggest and coolest thing I got to check off of my career "To Do" list is running a race with my son.  It was really awesome!  And at the end of the day, it was really more about just hanging out together.  Neither one of us are ever going to set any land speed records.  But over the past few years, he's been a lot busier with his life and we really don't have much time to do stuff like this anymore - so it was simply awesome!  To be honest, I was really surprised that he made it the whole 3.1 miles without walking.  I was really proud of him ... and I know he was proud of himself.  It was a great day ... hopefully we can do it again sometime!
...be great today!
Posted by Jim ... 50after40 at 7:53 AM