I'm a relatively new runner.  I've only been running for about ten years, and marathoning for three.  But I have a profound respect for the people and history that made running what it is today.  Over the years, these folks received joy and personal satisfaction by simply lacing up their shoes and heading out on a lonely road by themselves.  Long before marathons grew to "Big Top Circus" events, these pioneers simply raced on weekends against buddies without the fanfare, medals, or t-shirts.  They did it for the simple love of the sport, the purity of competition, and the challenge of finding out how far they could push their bodies.  They are the ones who started it all.  But as marathon registrations continue to grow at a record pace, I'm sure many of these folks who have been running forever feel a little invaded and pushed to the side by all the newbies to the sport.

The other day I jumped on the Rocket City Marathon website.  I'll be running it in December if they don't pull my registration after reading this post.  This is the VERY FIRST thing you'll see on their site ... 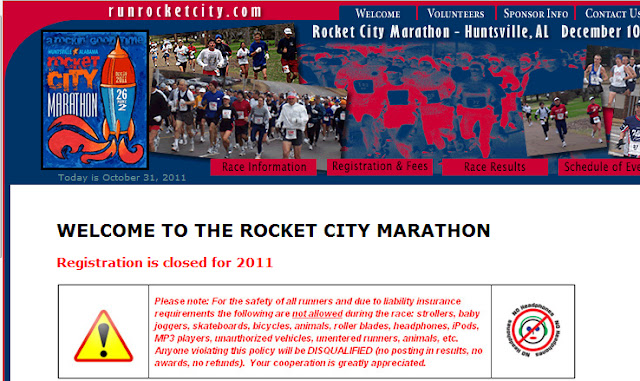 Okay, yes it's their race!  And the organizers, who most likely are these very same experienced and seasoned runners, can require everyone to run in cowboy boots if they want.  But I think we're getting a little carried away with the "NO Headphone Rule".  The Rocket City race officials list several things that are prohibited ... strollers, skateboards, bicycles, animals ... but HEADPHONES garnered a logo of it's own.  Really Rocket City???  Headphones???

I'm usually an iPod runner, though I can take it or leave it.   And I really think it's just a personal choice, for a personal activity.  I have no ill feelings toward those who run with or without them.  However, I really find the whole "Anti-Headphone" campaign a little puzzling.  I know many race officials will cite safety issue as the main factor in prohibiting their use. And yes, we've all been cutoff in a race by an over-exuberant, "in their own world", ear-bud clad runner rockin' out to K$sha on their way to completing their bucket list marathon.   A little annoying.    However, I have never read any statistic that specifically supports non-headphoners as being safer than their counterparts.  Common sense would of course lean toward running without headphones while navigating automobile traffic, or dangerous surroundings.  But the last time I checked, they usually stop traffic in most races for the runners.

I really believe that most "No Headphone Rules" are simply a personal preference of the race organizer or committee.  Almost like a vendetta in some cases.  If they really wanted to address safety or runner etiquette, they could pick on a lot of different issues.

1.  Runners stopping in the middle of water stops and immediately at the finish line
2.  Regrouping walkers and runners toward the end of a race causing late-race congestion and confusion
3.  Marathon relay teams bottle necking during their exchange
4.  Potholes that are almost never marked along the course
5.  Large pace groups of 50-100 people that run together in the middle of the street
6.  Slower runners at the front of the pack at the starting line that bog down the first 3 miles
7.  Spectators who cut across to the other side of the course

Some of these are minor of course, however they're never mentioned.  But HEADPHONES ... that's what everyone is so bent out of shape about!  Even uttering the word can get the blood boiling in some runners.  It's like cheating.  A shortcut.  An easier way to grind through 26.2.  And OH SOOOOOOOO unsafe!!!

With all due respect, at its core the rule really seems to be grounded in, "You're not running the way it was intended to be done ... or the way I did it!!"  Like it's the one last thing the old school runners have to hold over your head as a new runner.  I think I completely understand where it comes from.  And most likely, if  I had been running for 50 years, I'd probably feel the same way.  In a way I don't blame them.  But I think all it really does is alienate a large portion of the running community.  Although maybe to some in this crowd, you're not a real runner if you haven't been at it since Truman was in office.  Why?  Just because their clock started ticking before someone else's?  This way of thinking seems a little elitist.  Seems like rules like this are filled with a lot of venom.

The thing I find the most confusing about the whole issue, is that it seems to be a huge double standard. These races advertise everywhere, and brag about the record breaking number of runners that participate. And there are tons of magazine and internet articles about this being the "New Running Revolution".  Many of these old-timers seem eager to share with their buddies how many were at the pasta dinner, or in line on race day.  However, it appears obvious that an overwhelming percentage of new runners are headphone users.  You see them in every race.  They outnumber non-headphoners by a large margin ... especially the further back in the pack you go.  So what do they want ... they money, the popularity of the sport growing like never before, and thousands of people getting in better shape ... or a petty little rule?  I mean c'mon man!  This fat, lazy, clinically-obese country is actually trying to do something healthy.  Why would race organizers want to do anything to hinder that progress ... oh yes of course, the evil headphones!

And speaking of the financial impact, how many new runners that rely on music in their eardrums decline signing up for a race because of a hard-core rule like this?   I mean, who wants to pay $100 just be disqualified.  But in a large, $100 entry fee marathon, if 200 people look for a different race simply because they couldn't run with headphones ... that's $20,000!  Of course hardly ever does 100% of the money collected go directly to a charity.  But do the charities or sponsors even know that in some cases, the personal decision of one guy in a room somewhere who has it out for headphones, potentially cost them several thousand dollars?

Is there a competitive advantage with an iPod?  Probably.  I've found, without a doubt, that my iPod gives me a little boost at times in races.  I run harder and faster when a tune that I love is blastin' away in my brain.  I don't think most people would dispute that.  So if they want to make a rule where you cannot win any prize money with these "competitive advantages", I totally get that.  But when you tell me a 35 year old mom who is running her one and only marathon, in memory of a loved one or supporting a worthy cause, who is at the very back of the pack with not many people around ... WILL BE DISQUALIFIED JUST BECAUSE SHE'S LISTENING TO A LITTLE MUSIC AS SHE TRIES TO COMPLETE THE MOST DIFFICULT TASK OF HER LIFE???  C'mon ...what are we really doing?  Seems to me like that kinda misses the whole point of it all.

So yes, Rocket City, and many others like you ... I will obey your rules.  But I don't understand them or necessarily agree 100% with them.  For every reason someone could give me supporting the "No Headphone" rule, I can give you one back disputing it.  I think in the end it just comes down to 10,000 or more runners on any given Saturday or Sunday simply running headphone free.  And when you look behind the curtain and ask the race director why, the answer is simply ... and for no other reason than, "Because I said so!"
... be great today!
Posted by Jim ... 50after40 at 6:34 PM

Email ThisBlogThis!Share to TwitterShare to FacebookShare to Pinterest
Labels: Headphones