What a difference a week makes.  Well, not on the clock ... but at least with my mental state.  Last weekend's failed half-marathon PR attempt at Kansas City Rock The Parkway had left me with more questions about my running and conditioning than ever before.  And frankly, I stewed on it for the better part of a week.  It seemed the best remedy to clear it from my head was another race ... and soon.  So on Saturday, I ran the Garmin Oz Marathon Wickedly Fast Half ... a very long name for small half-marathon in Olathe, KS.

In the end I only improved on last week's half marathon time by about a minute and still didn't PR.  But I felt a lot better psychologically after the race than I did the week prior ... like some of the weight had been lifted.  To be honest, both races were pretty big downers.   As I mentioned in last week's report, I had been training specifically for a half-marathon PR for quite a while.  And quite frankly, I thought I was A LOT faster than I ended being in either race.  But after the disaster of last week, and even though I still didn't PR on a very flat and fast course this week, I felt much better with the way I ran and my overall performance.

The Race
The race that was held in Olathe, KS on Saturday morning has several names.   It's know as the Oz Marathon ... the Garmin Marathon In The Land Of Oz ... featuring the Dorothy Dash 5K ... the Munchkin Marathon ... and the Wickedly Fast Half!  Basically all things Wizard of Oz.

All races began and ended at the Garmin Headquarters located in Olathe, KS, which is a suburb of Kansas City.  Michael and I have a few friends who work at Garmin and over the years have been able to obtain some of their products at a discounted rate.  Garmin obviously manufactures many wonderful GPS devices, but my standard is the ol' trusty (and very big & boxy on my wrist) Forerunner 305.  Michael recently got the Forerunner 910 XT Multi Sport for her running, biking, and swimming.  When my 305 finally gives out, I'll probably change to the 405 which is much sleeker and offers a few more options.

Michael had a long run scheduled for Saturday, and since I had decided to run this race at the last minute, she didn't go with me.  It was really weird running a race in my home town without Michael or my daughter Madison there.  It kinda felt like a marathon in some far away city, which I usually travel to on my own, except I was familiar with all my surroundings.

Since the race was only 30 minutes from my house, I saw quite a few local runners that I knew.  But standing at the starting line I got to speak briefly with a non-local runner, Hannah of More Than A Marathon.  She's an awesome 100 mile ultra finisher and has given me some running tips and advice in the past over email.  And at mile 2 someone tapped me on the arm and said hello. It was a girl named Amber - an awesome runner and Boston Marathon finisher from Lees Summit (my home town).
We go to the same gym and I think I first met her last year at the Kansas City Marathon.  She's fast!  And we pass each other a lot of mornings running before work.

I've ran about 40-50 races over the past 3 or 4 years, but Saturday was one of the best weather conditions I've ever experienced on race day.  It seemed a little chilly at 40 degrees when I first got out of my car to walk to the starting line.  But when the gun went off, it was around 45-50 with a slight 5 mph breeze and sunshine!  Simply perfect conditions!

To say this race is flat would be a huge understatement.  It is unbelievably SUPER-ULTRA-FLAT and SUPER-ULTRA-FAST.  In fact, the overall winner, 50 year old Kevin Miller from Olathe, broke the men's Kansas 50-54 Age Group State Record on Saturday with a blistering 1:12:30 ... a 5:33 pace!!!  In fact from speaking to folks, a lot of people set personal bests on Saturday.  I was simply the perfect course, with perfect conditions, for a fast run.

After my race last Saturday at Rock The Parkway, I really didn't have much soreness, other than a little quad stiffness until  Monday.  But as with most races, I noticed a huge energy depletion for most of the week with empty legs trying to pound out my standard mileage.  I knew it was probably too soon for a really fast race - and going into the run I knew I most likely wouldn't PR, but I wanted to run strong and NOT crash in a half-marathon like I had done 7 days prior.
When the gun went off I felt pretty good.  I could tell right away my legs were basically shells of themselves without much to give - but I didn't feel like I was having to work too hard to keep a good pace.  The week before I had started way too fast for me with my first three miles going 7:30, 7:10, 7:00.  I wish I could be one of those folks who starts really fast and holds the pace the whole race, but every time I've attempted that strategy, it's ended poorly.  So I had made up my mind that for this race, I would start slooooow!  Really slooooow!   And then gradually build speed.  Believe me, it's not lost on me that if I could start a little faster not only in shorter races, but also marathons, I would probably have PR's of 1-2 minutes faster.  But I just can't do it.  These old legs need time to warm up over the course of the first few miles.  And on Saturday, they did just that.  My first three miles at Oz were 8:13, 7:44, 7:26.  Pretty slow to end up with an overall pace near 7:00/mile - but I felt with the slower start, I could turn it on at the end.

There's not really much to see in Olathe, KS ... and accordingly, this race is not really overly scenic.  The 13.1 course routes runners by Garmin Headquarters, Olathe Medical Center, The Great Mall of The Great Plains (which is an ironic name since it's about half empty), Olathe South High School, a bunch of houses and a couple of parks.

At about mile 4, I began the gradual descent in pace per mile to hopefully get me down around where I wanted to finish.  Starting slow like this in a race is always more enjoyable than the alternative.  And if you start slow enough and far enough back in the pack, you end up passing a lot of people.  In fact, it's always fun for me to track how many people pass me with this strategy.  And like a lot of races with this approach, I didn't get passed at all at Oz.  Even though I wasn't running "that" fast, it gives you the psychological illusion that you're flying when you start a little further back in the back in the pack and don't get passed. 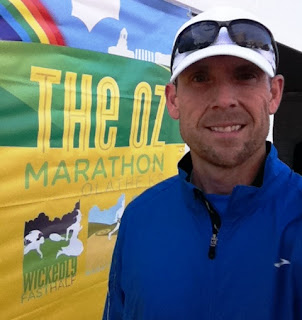 I honestly feel like I'm a better runner than my times indicated the past two weekends ... like if I could run 16 miles, and then have them take my last 13, I would finish much faster - but I guess the clock doesn't lie!  I finished with a pretty fair, but not great, 1:32:08 on Saturday - and even got a trophy for 3rd place in my age group.  The trophy is further proof that anyone can win their age group if the race is small enough - ha!  Truth is, I was actually 4th in my age group, but the winner of the 40-44 age group won the Masters Division so they pulled him from everyone else's results.  But hey, third place is third place I guess.

All in all, I'm pretty frustrated with where I'm at in running right now.  And these two races simply exposed a lot of things for me.  I haven't been AT ALL comfortable or happy with the change to POSE last year.  More on that later ... but basically the results were enough to really make me reevaluate my running stride again.  Also, I've lost a lot of endurance and stamina.  My speed is fair in bursts, but I just can't hold it for as long as I feel I need to.  So something has to give if I'm gonna run 6 more marathons later this year.

So even though I finished a little over a minute off of my PR at the Garmin Oz Half-Marathon - one thing's for sure, I felt a lot better after the race than a week before.  And for now, that's something to build on. Now it's time to focus on the Flying Pig Marathon in Cincinnati in two weeks.  I'm in no way ready to run that one ... so I better get busy.  Hope your running is going well - have a great week!
... be great today!
Posted by Jim ... 50after40 at 4:14 AM