I'm a Brooks guy ... through and through.  Brooks shoes just seem to wrap and cushion my foot better than any other brand I've tried.  But honestly, I've always had a problem with them being made in China.  Granted, by the time they're passed down the line, many of the dollars you spend on a pair stays in the U.S. ... but it's just the principle.  I've looked from time to time for a good American-made shoe (or at least non-Communist Country manufactured), and there aren't a lot of options. I've messed around with New Balance, but they've never really worked for me.

But in January 2012, I watched Meb Keflezighi win the U.S. Olympic Trials in Houston in what looked like a pair of Skechers.  What the heck ... Skechers???  As I did a little more research, I found that the Skechers GOrun series were getting pretty good reviews.  Plus, Skechers are made in California.  I've never been one to buy a pair of shoes because a celebrity endorses them, but if our top marathoner can run to a 4th place finish in the Olympics and endorsed them, they were worth a look, right? So I bought a pair and gave them a whirl today.

One of the first things I noticed about the Skechers GOrun Ride series is how many different color combinations were available.  I know this sounds shallow, but typically shoe manufacturers only have two or three colors available in a certain model.  Skechers.com literally offers dozens of colors in the GOrun Ride series, so being the boring old man that I am, I chose Gray & Red.  Crazy, I know.  The pair I purchased is mostly a darker gray, almost charcoal, with a very little red on the side, with an off-white sole.  They also came with a pair of white and red flat shoe laces ... which stayed tied really well on my run today.

Secondly, I noticed that the Skechers GOrun Ride's were a little less expensive than other shoes on the market.  They retail for about $80, but I actually bought mine on Roadrunnersports.com with my VIP discount and an online coupon code I found, for only $68!!!  Most Brooks I buy are usually right around $100.

When I put them on, they felt extremely light.  They weigh less than 8 ounces per shoe, and I could definitely tell that they were significantly lighter than the shoes I usually wear.  But even though they were very light weight, they still felt like they had some substance to them, especially in the soles.  They probably fall into the class of "Minimalist Shoe", and I could feel a little added support in the mid-foot and arch area, which was nice.  And even though the heel looks a little bigger on the outside of the shoe, your foot actually sits down pretty low inside.  They definitely don't have one of those huge heel cushions that a lot of shoes have.  So you would absolutely not want to heel-striking for very long in these.

I wanted to give them a real world "litmus test" right out of the gate, so I took them on my 15 mile long run on Saturday.  And simply put ... they were GREAT!!!  Overall, I would give them a A-.  For such a light weight shoe, they offered me a little more support than I expected.  I'm not huge, but I'm "bigger" for a runner ... 6'2"/180ish ... so I've always had trouble with shoes that don't support my foot strike.  But the GOrun's really felt pretty solid throughout the whole run and effectively moved and responded with my feet.

As far as cushioning, I could have used a little more, but it was decent.  I had read in a couple of reviews that most folks have trouble with the insole that come with shoe, sliding down and bunching up.  When I took the shoes out of the box, I could see why.  The insole was very light, flimsy, and fairly poor quality.  But I always replace the insoles of all my shoes with custom padded insoles anyway.  I don't really like having to do that, but I've found having that extra cushioning really helps with all the mileage I log.   And I've ran about 10,000 miles in a little over 3 years almost completely injury free, so apparently it's working.  But even with the supplemental padding, I could have used more ... especially toward the end of the run after about 15 miles.

Running 15 miles with some brand new shoes is basically asking for blisters or sore feet.  But I frequently take my Brooks right out of the box and put 20 miles on them that day.  So I figured if the Skechers were gonna "keep up", they'd have to do the same.  I was pleasantly surprised that there was absolutely no slipping during the workout, or hot spots that developed, potentially leading to blisters.  I wore my typical socks, and I think they're going to be just fine with these shoes, but I'll probably mess around with a few combinations to get the best fit.  I'm a huge "sock-guy" and think that many people have running issues that are simply sock related.  Good socks make a world of difference.

I really wanted to put these shoes through the ringer and find out what they could do.  Besides the 15 miles, I planned to run much of it just below half-marathon pace.  Here's what today's run looked like: 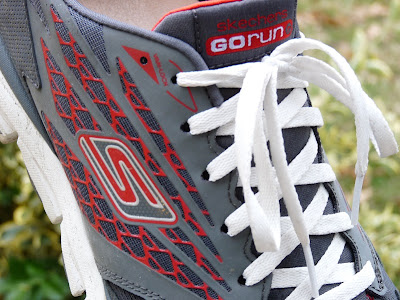 
So it was a good, fairly up-tempo, solid long run ... and the shoes performed really well!  My feet didn't get sore, but I could start to feel the pavement more and more with each foot strike after about 13 miles.  Plus, it was really cool today ... about 50 degrees ... so when it warms up this summer to 80's and 90's and the rubber on soles gets a little softer, I'm sure that will happen sooner.  Plus, the only real "negative" thing I'll mention about the shoes is that they seemed to be a little slick on the pavement.  I ran in the rain for some of the run this morning and at times my footing seemed a little unstable.  But a lot of other shoes would have that problem too.

To summarize, I'm really happy with the Skechers after my first run in them.  At this point, they won't be my everyday trainers. I'll still use my Brooks which offer more support and have worked well for years.  But I really plan on rotating them in on faster workouts and at this point would have no issue using them in a race.  If they hold up the mileage and continue to perform, this might be the start of new running shoe relationship ... with Skechers ... who knew?
... be great today!
Posted by Jim ... 50after40 at 11:38 AM