Below Average Training Week & More On The Dumb Picture Nothing was a disaster in week two of Chicago Marathon training, but nothing went really great.  I think the perception of a below average week of training was probably due in large part to the heat.  Don't get me wrong I LOVE the higher temps.  (However, according to every news channel right now New York apparently doesn't love it ... I mean it's been like 88 degrees there for about 3 days in a row ... really front page stuff.  I think people are literally bursting into flames on the Eastern Seaboard ... so hot.  Sarcasm.)  But I think training in the heat and humidity of the Summer only makes you stronger in the Fall.  And until this week, the temps just haven't been that bad.  So naturally during the first "warmish" spell, things slowed down a bit and got shortened up a little.

I'm making a conscience effort this marathon training cycle to not wear myself out before race day.  I'm shortening Speed and Tempo Runs, and also not logging 20+ miles every weekend of my life like I did last year.  But lightening the load is also the thing that has me a little concerned.  I just don't feel like I'm anywhere close to marathon shape.  Granted, the Chicago Marathon is still about 11 weeks away, almost three months.  But 57 miles for the week, and the first 20 mile long run of the year on Saturday darn-near killed me.  I've just lost a lot of conditioning.

The biggest "Red Flag" for me was the long run.  It was the first time I'd ran 20 miles since my first Ultra Marathon on March 17th when I did 36 miles.  Over four months of no 20 milers!  That's just not like me.  So on Saturday morning, at 84 degrees and 87% humidity, I did my first 20 miler of the season.  And it sucked!!!  I averaged an 8:10 mile, which is fine, but is nowhere near where I need to be.  And overall it was just a lot tougher than it should have been.  I've spent a lot of time lately on shorter races and abbreviated Tempo work, so running anywhere marathon pace for very long has been tough.  But we'll see how it goes from here. 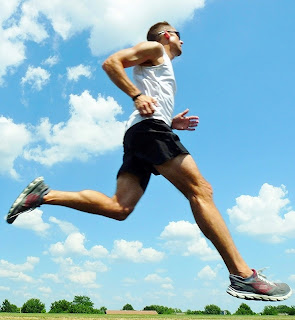 Okay, now to the dumb picture I posted of me running on Thursday.  It got quite a few interesting reactions, questions, and comments.  That, combined with a few emails I got about it ... here's some explanation.

1.  I think we should be past the point where I have to explain that I'm sarcastic and kid around about 99% of the stuff on my blog - but no, I DO NOT think I'm a "Greek God of Running Or Something".

2.  Yes, the picture is 100% me and not photo-shopped other than enhancing the color a little to make the sky look a little deeper blue.  This is one of about 500 pictures I took that day.  I just thought this one particular photo was pretty cool.  The sky and lighting just happened to be perfect. Some of the "out-takes" are shown below.

3.  Yes, I LOVE photography, but I'm not great.  It's something that I could really get into though.  I love looking at creative photos and trying to figure out how they got the lighting so perfect. Ultra marathoner Cory of Fast Cory is one of my favorites in the blog world.  He's a really good photographer that gets some awesome shots.

4.  "Logistically, how did you get the picture?"  My camera has a "multiburst function" that I can set with a timer.  The camera will count down from about 15 seconds and then snap 10-12 consecutive action photos.  I set it before each lap.  As it was counting down, I ran about 30 meters away from the camera, and then turn around and ran back toward the camera, which was on the ground next to the track.  When I was at approximate full speed I would pass in front of the camera just as the timer went off and it would get several photos of my stride, which I was trying to capture to analyze later.  Yes, I'm a HUGE nerd with this stuff.  But I like tinkering.