Ah yes, the Country Club plaza in downtown Kansas City, Missouri - probably the Crown
Jewel of our beautiful city.  And on Sunday, it was almost as beautiful of a morning for a 10K race.  Michael and I ran in the 3rd Annual Plaza 10K on Sunday ... and both set new PRs ... RAWKFIST!!!

The Plaza 10K is the fastest growing, and quickly becoming one of the Midwest's premier 10K road race events.  It's popular because with the exception of a small 2 mile fun run, it's simply a stand-alone 10K event. Also, it's flat.  As in only 71ft of elevation gain flat.  There are a couple of small rises at mile 5, but other than that, it's a smokin' fast course.  And finally, you get to run through one of most beautiful areas of Kansas City.  It's really a great race.

This year over 3,000 runners finished the race, which is a thousand more than last year.  There were a whopping 168 runners in my age group alone.  And Michael had 417 gals in hers.  Chicks everywhere, man!  And as I perused the results after the race, I notices hundreds of folks not only from the Kansas City Metro area, but many surrounding cities and States as well.  It's really turning into a big event.

The race begins on Ward Parkway along side Brush Creek on The Plaza, and heads Southwest toward Pembroke Hill High School.  Just past the high school, runners turn around and run back toward, and eventually through The Plaza on 47th Street headed toward Nelson Atkins Art Museum.  After passing Nelson Atkins on Emanuel Cleaver II Blvd, runners again turn back toward The Plaza just before reaching 71Hwy, running along Swope Parkway and Volker Blvd., turning South on the campus of University of Missouri Kansas City - where Michael earned her MBA.  After that, runners take the home stretch across Brush Creek again and back toward The Plaza, finishing again on Ward Parkway.  The course is filled with beautiful historic homes, manicured landscaping, upscale retail shops, wonderful restaurants, and fine art and culture ... simply the best of Kansas City.


I spent a ton of time the week and morning before the race trying to relax and not let stress and excitement steal my energy before even getting to the starting line.  I knew that I was in great shape right now and had a fairly fast race in me, but I've also experienced plenty of failure on previous race days from being too amped up.  So the goal before the Plaza 10K was to relax, which I did fairly well. 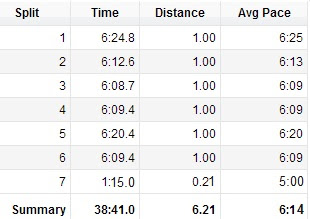 For some reason I miscalculated my warm up time a little and only got in 2 miles before the gun. I had planned on 3.  The result was nice loose legs, but I didn't really get to ramp my heart rate up to where I wanted it for the race since I had to cut my strides and sprints short.  However, standing at the starting line, I was in perfect health, with no lingering leg issues or tightness of any kind.  And since the race was right in the middle of my marathon training, and at the end of a 51 mile week, I felt great about it.  I don't remember feeling much better for a race.

The gun went off and about 100 runners sprinted out ahead of me.  I'm a notoriously slow starter.  I glanced at my Garmin and we were at about a 5:50/pace, which felt fairly easy, but I slowed it down a little because I knew I couldn't hold that for 6 miles.  I spent the best part of Mile 1 catching my breath, settling in, and jockeying for position.  You can always easily spot the overly ambitions runners who start too fast in these races.  They are gassed at about a half mile in.  It's kinda funny.  During the first couple of hundred meters they're thinking "I'm King Of The World!"  But a few hundred meters after that, they realize the field started a lot faster than they're used to running.  And they quickly drop off.  Such was the case on Sunday.

At about Mile 2, as we headed back through The Plaza, things began to thin out a little, and I began seeing some of the familiar faces I usually "dual" with in these local shorter races.  We ran up a small incline at the end of Mile 2 right before we turned onto 47th Street.  It was really short - only about two blocks long - but for some reason this hill really seemed to slow some of the runners.  However, the only runner that passed me all day (besides the jumbled mess at the start), passed me during this stretch.  I used the incline to measure my breathing and everything felt really good.  And I looked down and saw a 6:12/pace for Mile 2 on my Garmin which is exactly where I wanted to be.

Miles 3 & 4 are mostly long gradual downhill stretches where you can really pick up some speed.  I pushed my pace a little and ran a pair of 6:09's for both.  I felt like I could have easily been under 6:00 on Sunday during this stretch, but really wanted to save my legs for the hills at Mile 5.  The two mile stretch over Miles 3 & 4 were simply amazing, and I really felt like all my training was paying off.  I was really fluid with a nice short quick stride, and really good posture.  My legs felt strong and fresh and I felt like I was just gliding, not fighting it all at a faster pace for me.  I was just a great day.

The only slightly challenging portion of the course comes at Miles 5 & 6, just South of the University of Missouri Kansas City campus.  There are a few rolling hills as you head back toward The Plaza, that at 10K pace, cause you to evaluate things a little.  My pace slowed during Mile 5 to 6:20, which was a little disappointing, but not devastated.  I still felt good and had actually backed off a little for a strong push for the final mile.  This strategy worked pretty well as I managed another 6:09 for the final mile.  All I had left was the final homestretch and I was pretty sure I had a strong kick in me.

I knew I was running a solid race because I had passed a lot of runners and was gaining on a couple of more.  I thought I could still reel in before the finish line.  So as we turned the corner back onto Ward Parkway for the last .2, I hit the accelerator and pushed by both of them at a 5:00/pace.  At 44 years of age, I crossed the line at 38:41, for a 6:14 average pace overall.  I was ECSTATIC!!!  It was a 10K PR for me of about 1:11, and I couldn't have been happier!﻿
﻿﻿
After I caught my breath, I went and got a copy of my printed results.  I was really surprised at what the printed paper showed.  There was prize money available for the first 4 overall finishers and the top 4 Masters finishers on Sunday.  And going into the race, based on last year's results, I thought a performance like this would put me close to a cash prize in the Masters Division.  But with the increased attendance and speedy field, I was only 3rd in my 40-44 age group ... and freaking 11th in the Masters Division of 40 & over.  There were actually 10 older guys who smoked me on Sunday!

However, one of the older runners that finished ahead of me was 51 year old Kevin Miller.  On Sunday, he broke a 30 year old Missouri State age group 10K record with a blazing 33:21, for a 5:22/pace!  When you age-grade the results, this guy is maybe the premier runner in KC.  Simply amazing.  And the winner of my age group was the ultra-fast Ken Moran, who at 43, ran a 35:32, crushing the rest of our field.  In fact, the race officials are still confirming, but initially they reported on Facebook that it was the fastest 10K in the Midwest this year with the male winner running a blistering 30:55, and the female winner cruising to a 35:04!  It was just a really fast field and really fast course.

After the race I met up with Michael and she told me that she had crushed her old 10K PR as well! She has been training great and running really well and I'm so proud of her!  This race came with about 4 weeks to go in our Chicago Marathon training, and all in all it went exactly as planned.  I've really been training well and have had the great fortune of perfect health so far.  I knew that on a good, low humidity morning, I could probably come close to a PR.  But I had no idea that I would shatter my old mark by 1:11.  It was just one of those days where everything went right and I ran really well.  I think I get an Age Group Medal mailed to me later this week, but that's not why this race was such a big deal.  I really wanted a gauge of where I'm at in my marathon training, and based on the way I ran on Sunday, I couldn't be more pleased.  Hopefully it's a harbinger of a great marathon next month!
... be great today!
Posted by Jim ... 50after40 at 3:34 PM