What's The Fox Say ... Great Tune Up At The Fox Valley Fall Final 20 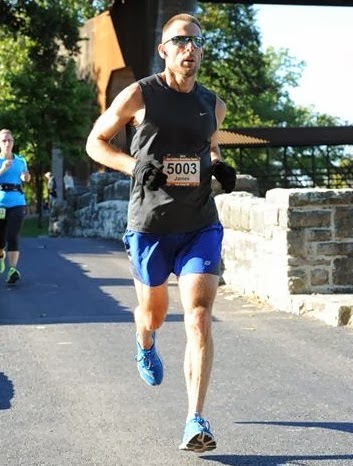 About a week ago my son turned me onto the YouTube viral sensation song "The Fox" by the group Ylvis (watch it here).  It's either genius, or completely insane ... but I LOVE IT!!!  Anyway, the line in the song asks the question "What's the fox say?"  Well, that query couldn't have come at a more appropriate time because this weekend Michael and I ran the Fox Valley Fall Final 20 in St. Charles, IL.  And we found that "what the fox says" is a lot of fun, great food, my second Masters Win of the year, and more importantly a great Chicago marathon tune-up! (Let's not get too carried away with the win ... it was a very small race, and a lot of folks were just using the 20 miler as a workout, but still ... Rawkfist!!!)

Michael found this race in her endless online search of upcoming races.  And since St. Charles, IL is not too far from my Corporate Office and I'm familiar with the area, we decided make the 8 hour trip from Kansas City for a nice weekend get away.  The trip to the race wasn't bad because we broke it up over two days, staying in Iowa City, and then heading on the next day.  But the trip back friends, was a GRIND!!! After the race we ate a quick bite, and then hopped in the car for the full drive back ... brutal!

When we woke up on Sunday morning for the race, it couldn't possibly have been better conditions.  It was a little dewy outside with 91% humidity, and the temperature was a PERFECT sunny 44 degrees with almost no wind!  I don't remember ever having better conditions for a race.  Simply amazing.  It was just a perfect fall morning with a light chill in the air simply made for running.

The Fox Valley races include a half & full marathon, and a 20 mile race that many runners use as their final long run before the Chicago marathon, which is exactly why Michael and I were in town.  The Chicago Marathon was 3 weeks away from the Fox Valley event, and it made for the perfect tune up.  Most marathoners "dress rehearse" their marathons over and over during their normal long runs, but the Fox Valley Fall Final 20 was an actual living breathing dress rehearsal with real world marathon conditions.  And it was a great opportunity to lock-in my nutrition, hydration, and pace plan for the marathon.

Since I've been eating a cleaner diet, and eliminated a lot of wheat and gluten, I've found that I just don't need as much the day before the race.  Here's what I ate the day before ... 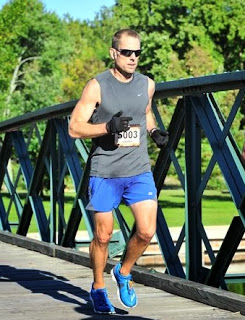 The morning of the race, I ate my typical banana and steel cut oats.  I also had two beet shots an hour before the race.  The beet shots have been great so far.  They don't upset my stomach at all, and it's a lot better than drinking 16oz of beet juice right before a run.  Like I've said before, I don't know if it's purely psychological, but I'm a believer in the power of beet juice.  My results have been great with them so far!

The week before the race had been my toughest training week for the Chicago Marathon thus far.  I'd ran a 10K PR on Sunday, worked in two really tough leg strengthening workouts, a 15 mile marathon pace on Tuesday, and a tough Tempo Run on Thursday, for a total of 65 miles.  So standing at the starting line I was a little chilly, but mostly I felt fatigued and little heavy-legged.  I planned on just going out and running by feel, not overly concerned with pace.  I wasn't planning on "killing it", but I DID want to run several miles at my marathon pace smoothly and work on hydration and fueling. I had a little tightness in my right adductor, but other than that physically I felt pretty good. 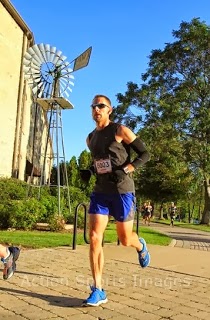 The race started and right away I felt the right adductor tighten quite a bit more.  It was a problem right out of the chute.  I used to struggle with this issue all the time, and it's mostly related to tight hamstrings, but I hadn't felt all summer until now.  I chalked it up to the tough workouts the week before and also being a little tight before the race.  I really didn't have an opportunity to warm up as much as I would have like before the race.  I think if I would have stretched a little more, and ran another warm up mile it wouldn't have been as bad. But it was enough an issue that I actually pulled off to the side to stretch it about 3 times during the run.

The other issue was my peanut-sized bladder.  It's something I struggle with in races.  I pee'd about 4 times before the race, and almost immediately after I started running, I had to go again.  So I stopped at mile two and used the bushes.  I also had another stop at mile 10.  All together with the two bathroom stops and the other stretching stops, I easily cost myself two minutes.  I've gotta figure that out in the next three weeks.  It can simply be a game changer on race day.

The course was nice and flat along a paved trail adjacent to the Fox River.  It was a well maintained and beautiful trail, but for most of the second half of the race I was running with no one near me.  There were volunteers to point the way, but at times it got a little confusing, which happens sometimes in races when you aren't following a pack.  The biggest issue was around mile 14 when we joined the half marathoners, and also the 20 milers and marathoners who were still going out.  We all had to share a narrow path and several runners were all over the trail going both ways.  I had to dodge and dart around several folks just to keep pace, narrowly avoiding crashes on more than one occasion.  The volunteers who were there did a great job, but it would have been nice to have a few more folks controlling the flow of the course.  It got a little dangerous in a couple of places.  But other than that, it was a nice run. 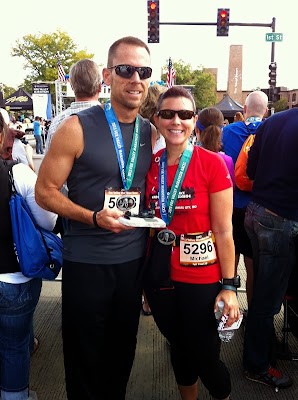 With the exception of the stops, the race went pretty much as expected, except for the tightness in my right adductor, which never really loosened up.  Also, I got a weird tightness in my left calf after the second pit stop.  I never struggle with calf tightness, but some reason it really tightened up and affected the run a little.  Both of the issues were enough of a factor that they inhibited my stride and posture a little.  When I stood straight up, I could really feel the adductor.  And I felt the calf with almost every foot step.  They didn't really slow me down, but I knew they were there and the distraction kept me from running completely free.

While the pace felt "up-tempo", especially later in the race where I really felt good and let it go a little, it wasn't unmanageable or too challenging at all.  Basically, I did'nt feel at all like I "ran my marathon" on Sunday.  I've been guilty in the past of leaving my best runs on the training room floor. But I felt like I had a lot left in the tank, especially with being as fatigued as I was from the training.  The biggest thing I wanted to do was run 15 miles at or below marathon pace, which I did.  My targeted pace that I want to spend most of my marathon at is 7:00.  I easily handled that on Sunday and even managed  7 miles at a 6:45 or better.  Plus, my last mile was 6:13 and it felt great.  I crossed the finish line relaxed and satisfied with a 2:19:55, and a 7:00 overall pace.  Although it was certainly an "up tempo" run, I never felt out of control or like I was working too hard.

I felt really good about the race.  Other than the tightness issues I can work out in the next few weeks, I had accomplished my goals ... put together a solid training run with several miles at marathon pace, and finish healthy.  I knew I had ran well, and also knew there weren't that many runners in front of me, but when I picked up my results I was surprised to find that I was the first person over 40 to cross the finish line in the 20 mile race.  As a result, I got a really cool fox trophy as the Masters winner, along with my finisher medal.  So it was a nice bonus and great way to wrap up a wonderful event.

After Michael finished her race, we hurried back to the hotel and then went and found some pizza at a GREAT 40 year old Italian Restaurant called Salerno's On The Fox.  Michael had a meatball sandwich, but I had pizza.  I've really avoided pizza quite a bit this training cycle, but I was really pleased with how the day went and used it as a little reward for myself.  But then the real challenge came ... the 8 hour drive back to KC.  Michael was pretty sore after her run.  I felt fine.  But we stopped to stretch about every hour, including a brief visit at the eclectic and entertaining World's Largest Truckstop near Walcott, Iowa on Interstate 80.  The biggest problem with heading home that time of the day was looking directly into the sun as we headed West.  It was blinding.  And once it went down and everything got dark, I fought sleepiness the rest of way.  We made it safely though.


I've been training hard and running fairly well lately.  And hopefully I can keep it up for three more weeks and run my best marathon ever in Chicago.  I'm really approaching this marathon mentally differently and trying not to focus too much on the results and stress myself out.  I know I have A LOT faster marathon in me than my PR of 3:20.  I just have to find a way to release it on race day and run relaxed, and how I know I'm capable of running.  While the mental aspect is the biggest thing I'm focusing on the next few weeks, it was great to put together a nice physical performance a few weeks before Chicago as well.  Hope your training's going well.  Have a great week!
... be great today!
Posted by Jim ... 50after40 at 10:45 AM