That's What Burger Do!

The Kansas City Royals have an outfielder, Jarrod Dyson, who is one of the fastest players in baseball.  In fact, he shaved the word "ZOOM!" into the side of his head for the Playoffs and World Series.  In July of 2013, after his fleetness of foot directly influenced a game, the oft grammatically challenged Dyson commented, "That's what speed do!"  It instantly became a rallying cry for the team.

Until 2014, the Kansas City Royals had not made the Playoffs for 29 years.  29 years!  Literally a lifetime for some young adults!  It was longest non-Postseason drought by any professional North American sports team.  We were really bad for a really long time.  So when the 2014 Royals earned the right to play in a Wild Card elimination game against the Oakland Athletics, everyone in KC was Royals crazy.  Kansas City trailed 7-3 in the 8th inning of the game, with only six outs remaining in their season.  But they tied the game in the 9th, and later won the game 9-8 in the 12 inning in one of the most dramatic Playoff finishes ever.  When it was over, I was ecstatic, mentally and emotionally exhausted ... and starving!  Even though the game concluded somewhere around midnight, I decided to go out get a cheeseburger.  Mind you, I'm a borderline health food nut, but a greasy cheeseburger just seemed like the perfect celebration.  A few nights later, when the Royals won their first Division Series game against the Angels, and I was hungry again ... so I ate a second consecutive late night burger. 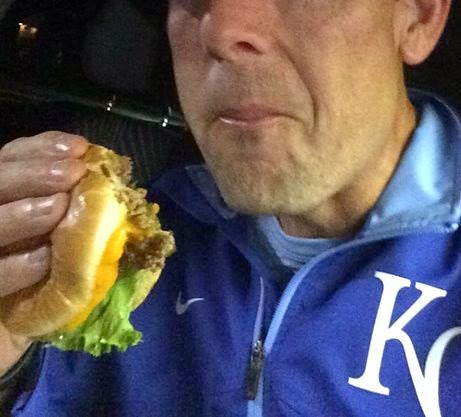 The problem with the second burger was that I'm a little superstitious about my sports.  And when the Royals won yet another game against the Angels, the very next night, making it three straight Playoff victories ... well, I felt compelled to retrieve and consume another burger.  Was this cheeseburger streak directly responsible for the Royals three-game winning streak ... we may never know.  But one thing's for sure, I didn't want to be the person responsible for screwing it up, and there was only one clear choice ... it was my duty to eat a cheeseburger after every Royals Postseason victory.

Believe me, after 29 years of waiting for the team you've lived and died with your whole life to make the Playoffs, you're happy just to be there.  No one in KC, or anywhere in the world could have predicted what happened next ... the Royals winning ... game, after game, after game, after game, after game!  The 2014 Kansas City Royals won eight straight Playoff games on their way to the World Series.  They literally went 8-0!  And while that was a record breaking accomplishment ... you guessed it, it meant drive-thru cheeseburgers ... late night, after late night, after late night!  In all, the Royals won 11 games total in October on their way to Game 7 of the World Series.  And I ate a cheeseburger after every one of them.  Sadly, the burger I wanted the most was burger number 12, which would have been for the World Championship.  But as most of you know, we came up short 3-2 to the San Francisco Giants in that last game.

So that's the burger story.  Of course combined with frequent early morning donuts, reoccurring root beer for some inexplicable reason, and the complete negligence of any form of running ... I gained a few pounds.  I promise that about two months ago, there was actual visual evidence of abdominal muscle existence.  However now, there seems to be only burger-residue remaining.  But alas ... after 29 years ... IT WAS FREAKING WORTH IT!   At least that's what I'm going to tell myself with each painful crunch over the next couple of months.  Because after all, "That's what burger do!"  GO ROYALS!!!
... be great today!
Posted by Jim ... 50after40 at 4:06 PM