Way Out Of My League 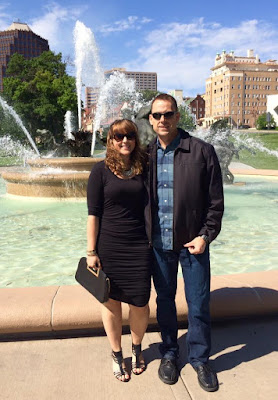 Saturday, Michael and I celebrated our 11th Wedding Anniversary.  We spent some time walking around the beautiful Country Club Plaza on a perfect, although a little chilly, Kansas City evening.  Later, we had dinner at Fogo de Chão Brazilian Steakhouse where I basically ate my weight in red meat, which I paid for on Sunday. I'm pretty sure I gained about 17 pounds during our anniversary dinner, and it made a mile 4 mile recovery run on Sunday morning a little uncomfortable ... but RED MEAT!!!

Now I know what you all are thinking ... "Wow Jim, you are so much hotter than your wife!" ... and while I totally understand where you're coming from, I couldn't disagree with you more.  Actually, I think I'm in way over my head.  Because not only is she amazingly beautiful which is obvious ... she's smart, really funny, compassionate, puts up with my crap ... and most importantly, is my best friend.  This woman and I have been through a lot together, and I'm so lucky that she's in my life because she makes it so much better.  I love her now more than ever.

But something else I'm out of my league with right now is my running ... at least as far as my old paces go.  I think it's natural to want to go faster thit was an what's physically possible after some down time or an injury.  I mean, one of the last memories of my pace was when I was in peak condition right before I got sick.  So naturally, my mind is trying to tell my legs to just automatically turn over that fast again.  But it's obviously unrealistic for a while.  I feel like I'm slowly getting back to being a runner, though.  I put together two straight 40 mile weeks, which were both capped by 15 and 16 miles runs.  My legs are feeling stronger and stronger, and the quicker paces aren't killing me like when I first started back.  And my diet is actually starting to get a little better.  I ate like three or four salads last week ... which about sent my body into convulsions, but I managed to power through it.  Just gotta keep grinding.

Before Michael and I went out on Saturday night, I actually had a pretty good, and fairly quick 16 mile run.  The weather was pretty perfect at about 50 degrees, and I was able to turn in some decent splits.  Here are the paces ...

Mile 13 was actually sub 7:00!!!  While the paces look good, I actually took like four water stops, and stopped the clock during three of them ... so the cumulative time would have been a little slower.  But it felt really good to generate some faster pace on a long run, and frankly I didn't feel like it was killing me the whole time.  And Sunday when I woke up, although my gut was full of probably a side of beef, my legs felt really good.

So every week seems to be a little better than the last.  With the exception of my Royals playing really crappy right now ... everything in my life is pretty good.  I'm really blessed.  And hopefully soon, my running will be one more thing I can slide over to the positive side of the ledger.  I think I'm headed in the right direction.  Have a great week!
Posted by Jim ... 50after40 at 10:29 AM