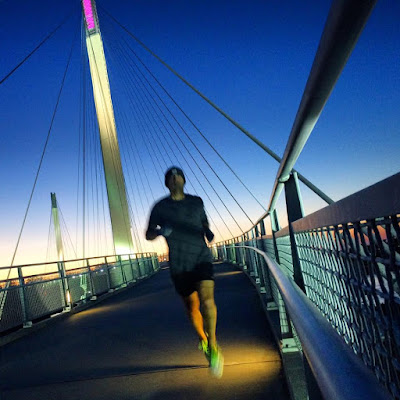 Saturday's 22 miler capped a 61 mile week.  And even though I missed all of my double runs because of work and fell about 9 miles short of my goal, all of the workouts went fairly well.

TEMPO THURSDAY
On Thursday, I had a Tempo Run on a 34 degree morning in Iowa.  It was the first chilly run of the year, but all things considered, it went fairly well.  Here are the splits:

Two mile warm up & cool down for a total of 11 miles.  The 7 miles of Tempo Pace were comprised of two 3.5 mile sets.

I wasn't "exceedingly excited" about the workout since I feel like I should be a little faster right now, but it was a 6:41/average pace, which wasn't horrible.

LONG RUN SATURDAY
On Saturday, I ran my longest run of this training cycle.  It was supposed to be a 22 miler, but ended up being about 22.8  I included some pretty tough hills on the back end, and they basically kicked my butt.  I ran the first 14 miles at an easy 8:07/average pace.  It was fluid and very controlled.  But I wanted to add about 6 or 7 faster miles at the end of the run to get my legs used to feeling the faster pace when they were fatigued late in a race.  So I ran the 7 miles from 15-21 at a 7:39/pace.  And I had mixed feelings at the end of the run.

On the positive, I felt really good at mile 22, like I could have easily done another 4 if the marathon were today.  My legs felt strong with no issues.  But somewhat of a concern was the difficulty I had even maintaining a 7:39/pace over those 7 miles.  Part of it was because the course had 1,100 ft of climb, and I sped up on the toughest/hilliest part of the route.  Also, for some reason, once I start out running slower and my body adapts to that pace, it seems very tough to just ramp it up when I'm tired.  It's almost feels easier at times to run whole thing fast, although I was trying to save wear and tear on my legs.

But the thing that concerned me most was my continued stomach issues after the run.  I'm typically okay during the run ... but almost immediately after a 20+ mile effort, I feel pretty nauseous.   I never used to experience that.  Sometimes it's to the point where I throw up afterwards, although that's only happened after marathons.  But today, once again, after the 22 miler, I felt a little queasy.  I'm sure it's just a nutrition thing, but I need to figure it out.

FALL  MARATHON
And finally, for all 15 or so of you (literally) that have been asking ... yes, we've picked a marathon.  But we're keeping the date and location to ourselves ... sorry, lol.  Often in the past I've put too much pressure on myself by talking about it way too much in advance, and I really want to run a good race, so we're just keeping it on the "down low" for now ... so stop asking me, lol. I'll post about it probably a week before the race or so ... but it's still quite a ways off.  I really appreciate all the questions and suggestions I've received on it, I just don't want to jinx it.