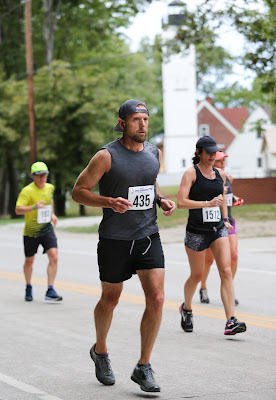 The Erie Marathon at Presque Isle is one of the most BQ'able races that I've ran thus far.  The course is mostly tree-lined, providing plenty of shade on sunny Pennsylvania mornings, and it's also pancake flat & fast.  There's only about 250' of elevation gain with absolutely no hills on the two loops through Presque Isle State Park, the peninsula that divides Presque Isle Bay and Lake Erie.  Many runners choose this marathon as a "last chance for Boston" race, and it pays off.  In 2018, 46.2% of the Erie Marathon runners qualified for the 2019 Boston Marathon.  I was unfortunately in the 53.8% that did not.  But that didn't keep me from enjoying a really well organized race that I would recommend to anyone! 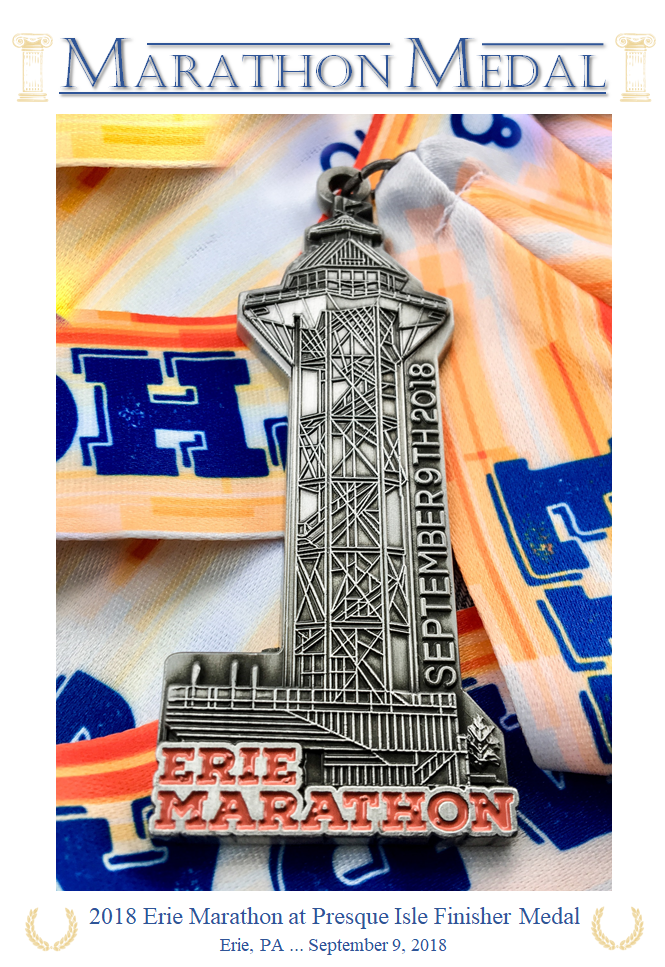 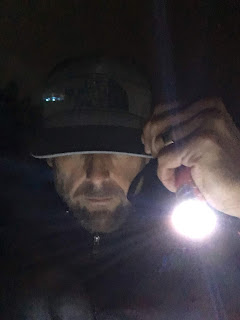 I drove from Kansas City, MO to Erie, PA and got to the seaside city a day early.  It was plenty of time to visit a little of Erie and especially Presque Isle State Park before running the race.  As reported on KDKA Channel 2 in Pittsburgh, PA, 10best.com named Erie Beach at Presque Isle State Park the best fresh water beach in the United States.  It was really dreary and rainy when I was there, so I didn't get to fully enjoy all the park had to offer, but it was indeed beautiful, and well kept and clean.

The pre-race communication from race director, Suzy Carstater was great!  She sent of plenty of detailed directions about pre and post race activities, and accordingly, packet pick-up was seemless and well ran with plenty of volunteers.  Runners received a short-sleeve dry-fit t-shirt in a nice hoodie back/pack bag.  There were several seemingly small things that really helped at this race.  One example is the small flashlight that was also in everyone's race bag.  It seemed like an odd addition for race SWAG, however it really came in handy before the race.

Everyone parked at Waldameer Park, a small amusement and water park at the top of the hill adjacent to Presque Isle State Park.  From there, runners could either wall the mile to the starting line, or take one of the several school buses lined up as race shuttles.  Most runners opted for the bus ride.
The buses dropped everyone off at the starting line, which was near Beach #1 on Old Beach Road - I think.  I don't remember for sure because it was pitch black outside at 6:30 a.m. on a heavily cloud covered morning.  But that's where the flashlight came in handy! 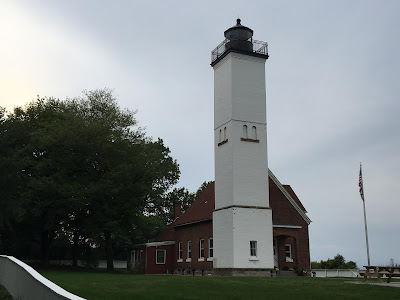 This race is a marathon only event and about 1,500 runners were in attendance.  But for the most part, it felt like a really small race.  I was really impressed with how the organizers kept everyone informed in spite of the large crowd.  There was pre-race music and a DJ to keep everyone loose, and bag drops and port-a-potties were very close to the starting line.

Even though the race is open to the public, it seemed to have the feel of a field at Boston or a competitive road race.  It seemed almost everyone was there to attempt a PR or BQ.  As I stood there watching the runners at the starting line, I seemed to be surrounded by a lot of really experienced runners and great athletes.  And as the skies began to lighten up, the race kicked off at 7:00 a.m.

Probably the only minor, and I mean very minor, thing that could have been a little better was the course congestion for the first several miles.  I'm not sure there's anything that can really be done about it with 1,500 runners packing onto the park drive that circles the isle.  But at times, it was almost shoulder to shoulder like a big race like Boston or Chicago or something.  I got behind a pace group at one point that took up the entire road, about 8-10 runners deep, and I burned a lot of energy getting around them.  But during the second half if definitely thinned out a little. 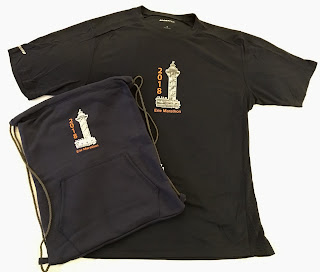 Although the weather was nice and cool in the mid 50's, it would have been nice to see the park in the sunshine.  The sun didn't shine the entire time I was in Pennsylvania.  It was really dreary, but it made running conditions perfect.  Throughout the two loops in the park, you run beside the shores of Lake Erie, passing light houses, beaches, and camp grounds.  Very little of the course is not tree-lined, and even on a sunny day the course would've most likely been fairly cool.

One of the things that really reflect a race's organization are the water stops.  The water stops at the Erie Marathon were great!  They were spaced very close together, all of them were on the right-hand side of the road, and each and every one had water first, with Gu Brew second.  This had been mentioned in one of the earlier communications about the race.  And even though it seems like a little thing, it's nice to not have guess what's in your cup as you're running by grasping a one.  Also, all of the stops were maintained by very enthusiastic high school students.  They were all very encouraging and did a great job.

I think I ate a little too much the day before and morning of the race in an attempt to fuel up more than usual.  I felt really really full the whole race like I was running with a big giant stomach.  Because of this, I intentionally skipped my last gel at Mile 20.  I just didn't want anything else on my stomach.  But that meant I was running the last 10 miles of the race on the gel I'd taken at 16.  I know better than to do that. 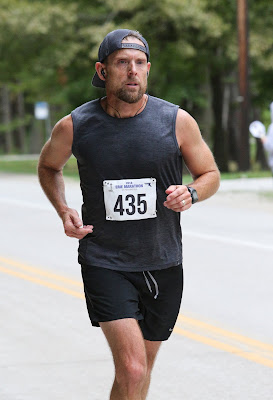 I felt good and in control all the way through Mile 24.  In fact later, one of my Instagram friends said she saw me at 24 and thought I looked strong.  She said I looked her directly in the eye as I went by and she thought everything was fine.  However, my pace began to slow about 20 seconds per mile at that point, but I was still about 5 minutes under my BQ time.  I pushed through to Mile 25, but literally when I hit 25.05 on my Garmin, I darted to the side of the road and began dry-heaving by a tree.  It literally came out of nowhere.  My body tried puking for about 5 minutes but nothing came up.  I was conscious of the ticking clock and tried taking a few steps, but every time I did I started dry-heaving again.  My eyes were filling with tears from trying to throw up and I couldn't see anything.  I eventually began running again ... very very slowly.  I stopped to walk for a minute near Mile 26 because I thought I felt it coming on again.  I'd ran under an 8:00 pace all day, but it took me about 16 minutes to complete the final 1.2 miles and because of that, I finished 3 minutes over my BQ time.

I was incredibly disappointed after the race.  The dry-heaving episode was completely running out of fuel related ... and it was completely self-induced.  I should have qualified fairly comfortably, but I really blew a great opportunity on a very fast course.  Even after 38 marathons, an ultra, and 8 BQ's, I still need reminders from time to time.  The Erie Marathon was a huge kick in the pants to remind to take my training more seriously and respect every single mile of the marathon.  There are tried and true fueling strategies in place for a reason, and if you don't honor them, you'll pay the price.

I wish I could say that failing to BQ didn't have an effect on my day ... but it did.  It was a very very long ride home.  But my regret had nothing to do with the wonderful race provided by the Erie Marathon.   It's a very fast race on a beautiful course, with wonderful volunteers and organization. I would highly recommend it to everyone.