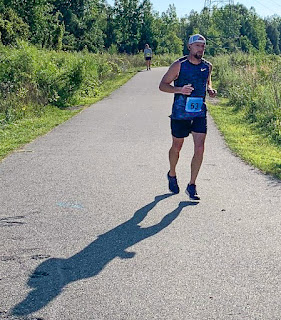 If you're looking for a large race with lots of frills and thousands of runners, the Millennium Meadows Marathon is probably not the race for you.  But I chose it because it fit into our vacation itinerary, it allowed me to check off another state for marathons completed, we had the opportunity to meet our friend Anne, and also because sometimes a small and non-eventful races are perfect.  This race checked all the boxes for what I was looking for, and I'm glad I was able to run it. 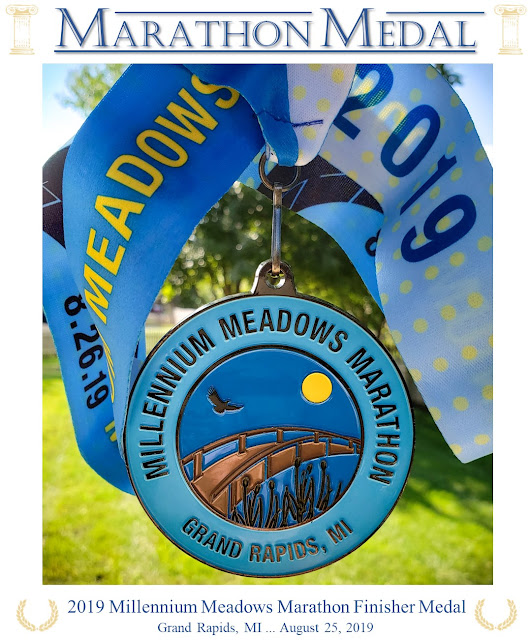 Michael and I had planned a road trip vacation for August through Chicago, Michigan, Niagara Falls, and Toronto, so a stop in Grand Rapids fit perfectly into our travel plans.   Michael actually found the Millennium Meadows Marathon on line while searching for near by races, and honestly, the thought of running a marathon with less than 100 runners didn't sound appealing at first.  It wasn't because extremely small races aren't charming in their own way, but because I was afraid of running off course and losing my way.  In small races if you don't run with a group, there can be long gaps between runners.  And if you're not familiar with a course that potentially isn't marked well, it's a recipe for disaster.  However, as I reviewed the race's course, I learned that runners actually make six loops in a local park to reach 26.2 miles, so I thought "how hard could that be".

The thought of running in Grand Rapids was also appealing because of possibly meeting Anne, a fellow blogger and social media friend who lived there.  Michael and I have known her over the internet for years, and always wanted to meet her.  This gave us the opportunity.  We actually got to have dinner with her and chat for a bit ... she was great!

The race takes place in the "Meadows" at Millennium Meadows (obvious enough).  Millennium Park is the largest urban park in West Michigan, located on the southwest side of Grand Rapids. Millennium Park connects four of the major cities in the area together, including Grand Rapids, Wyoming, Grandville, and Walker. (plagiarized that last part from Wikipedia)  We stayed at Hampton Inn in Grandville, only about 10 minutes from the starting line in the park.

Runners received a blue short sleeve t-shirt (pictured), and a copy of the race director, Don Kern's book, "And the Adventure Continues ... An Ordinary Man's Extraordinary Quest to Set a World Record" (also not pictured).  In 2011 Don set a world record for being completing marathons on all seven continents in 25 days, 18 hours, 10 minutes, the shortest time frame that anyone had ever accomplished the feat.

The staff for the race was very small, but very helpful and welcoming.  We picked up our race bibs and shirts the morning of the race, and then went to the car to warm up and relax a bit.  We were able to park our car only a few feet from the starting line, which was nice because it was only about 55F before the race started.  Those temps were perfect for running, but felt a little cool after spending the summer in 100+ heat indexes of Kansas City. 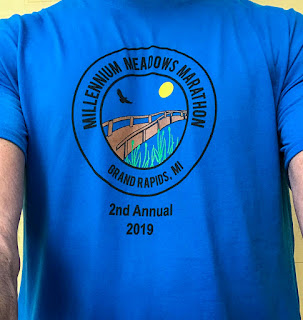 The thought of running the same 4 mile loop six times, with an additional mile at the beginning and end, seemed a little boring.  And honestly ... it was.  The course was beautiful, but as I've mentioned in other race reviews, I much prefer the visual and mental stimulation of people on the street, other runners, and changing scenery.  But I also know that as I begin nearing the end of running a marathon in all 50 states, I'm going to have to take what the schedule gives.  And that will mean running a lot of smaller races.

The temps were in the mid-50's with clear skies and almost no wind, so basically perfect weather for running a race.  The asphalt paved path was almost completely shaded, and early in the race we could see the rising sun sparkling through the leaves on the northwest side of the loop over the adjacent lake.  It was beautiful.

There were two water stops stationed on either side of the loop, about every two miles.  The volunteers, though obviously sparse for such a small race, were wonderful and very engaging.  They offered water and Gatorade, and even had pretzels and fruit at the water tables.  I really appreciated them having oranges, as they've really become my "go to" late in races if they're available.

As I recall, there were outhouses at both stops as well, however when nature called (about 6 times during the race for some reason) I just veered off course and ducked behind a tree.  I mean, we WERE in the woods.

At about mile 18, I passed Michael and we chatted for a few minutes before continuing on with the race.  She ran the half marathon and enjoyed the day as much as I did.

I went into the race planning to use it as a warm up race for other events in the fall.  It was basically going to be a long workout.  I didn't place any pressure on myself and planned on coming in somewhere around 3:45, which I did.  It was really nice to run a race at an easy comfortable pace without dying at the end.  Plus, it was awesome to not have achy legs for the rest of vacation the days following the race.

After the race, there were the typical post-race festivities and food available.  We didn't hang around long, opting to get back to the hotel room to recover ASAP.  However, everyone on the race staff was very hospitable and we greatly appreciated their willing to serve and organize a wonderful event.  Volunteers at races rarely get any recognition, but it's 100% the leadership of the race director and the willingness of volunteers to give their time that makes all of these races we run successful.

We thoroughly enjoyed our time in Michigan, but were quickly on the road the next morning to continue our somewhat circuitous route to Canada and back.  I would love to run the Detroit marathon some day, but for now, the Millennium Meadows Marathon in Grand Rapids, Michigan served the purpose of preparing me for future races, and checked off another state.