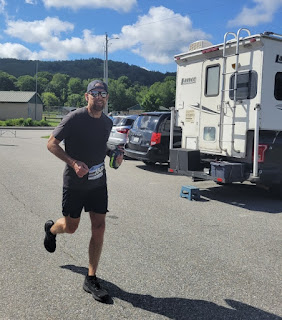 June 14-16, 2021
Springfield, VT - Claremont, NH - Sanford, ME
41-43 Marathons, 37-39 States
Runners: 172
Start Time: 5:00 a.m.
Course: Flat Overall
Weather: Avg 60 at start, no wind
SWAG: Tshirt
Crowd Support: None
Volunteer Support: Great
Food: Various race foods
Age: 52
Finish Times: 4:12, 5:07, 4:37
Running multiple marathons in consecutive days has never really appealed to me.  But after not completing a marathon in 2020 because of COVID, and NOT getting any younger, I decided I'd have to start doubling and tripling up if I ever wanted to finish this 50 States thing.  I'd ran back-to-back marathons in 2011 in Missouri and Iowa, and honestly, it wasn't really that difficult.  So Michael and I planned a vacation (as we often do) around running marathons, and headed Northeast to run three marathons in three days at the New England Marathon Series presented by Mainly Marathons.  Was it a challenge?  Heck yes!  Am I glad I did?  Heck yes!  Will I do it again?  Yep! 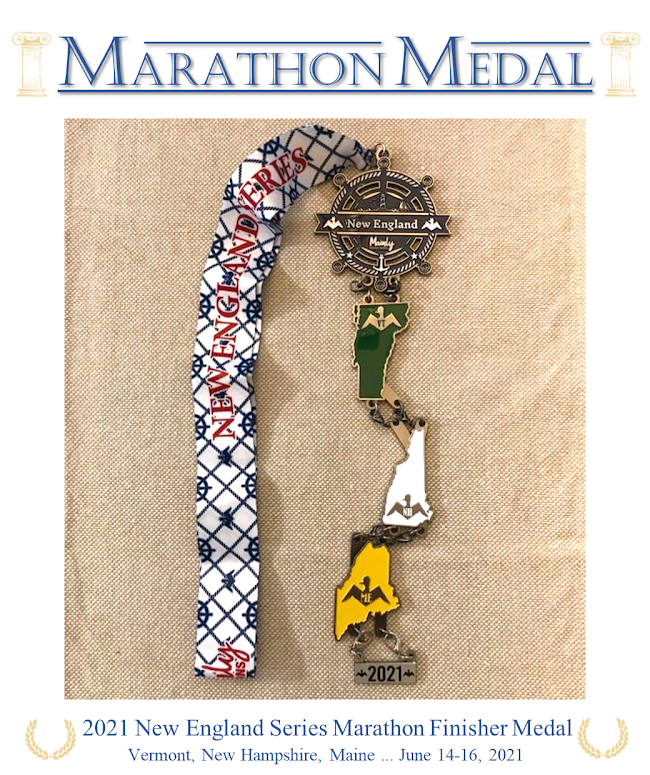 In 2020, I didn't complete an actual marathon, but I DID complete an endurance event.  I ran the virtual Run The States I-70 Challenge held from Memorial Day to Labor Day.  It was a virtual race that was meant to represent the 621.4 miles across Missouri and Kansas, in which runners tracked their daily miles and reported them to the race website.  I finished the challenge before any other runner in about 40 days, running almost every day, and averaging about 15 miles for the entire challenge, but probably over 20 miles per day the last week.  Completing the challenge, and running back-to-back marathons in 2011, gave me confidence that I could complete three marathons in three days if I trained correctly.
I knew training for three straight marathons would mean a lot of miles at a slow pace.  I also knew I'd have to increase my strength training, in my glutes specifically.  I'd suffered a pretty rough case of hamstring tendinopathy after the I-70 Challenge, that basically stemmed from inactive glutes for much of the challenge.  It was one of the most frustrating "running things" I've ever dealt with, and I knew I didn't want to repeat the same mistakes with this training challenge.
So I started with lots of leg strength training, specifically targeting my hips and glutes in the winter.  I also began bulking miles in the spring, which included back-to-back long runs on the weekend ... eventually evolving into back-to-back-back long runs, typically on Friday, Saturday, and Sunday.  Also, with a heavy training load like this, basically ALL of my speed training was out.  I probably didn't need to eliminate it completely, but speed is the thing that has typically injured me over the years, and I wanted to stay healthy for all the training through the races.  With this approach, training went great and I was ready for race day probably as healthy as I've ever been for a race or races. 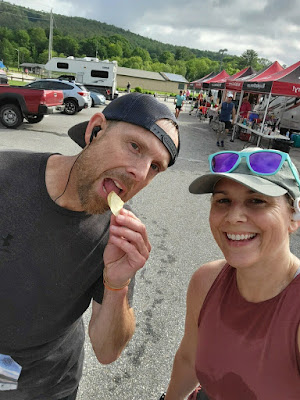 In mid-June, Michael and I flew to Portland, ME, and then drove across New Hampshire and Vermont to a small hotel called the Pointe At Castle Hill, near Ludlow, VT.  The first race was actually in Springfield, VT, about 30 minutes away, but this gave us a nice place to stay with a kitchen and two rooms.  Gathering race food and resting was the challenge the day before the race because neither of us had ever been in Vermont before and we wanted to go explore and be tourists ... which we did.  The day before the race we went on a one mile uphill hike, and then toured the beautiful state, but also managed to find enough food through grocery stores and local restaurants.
On the morning of the first race, we got up at about 3:30 a.m. and made our way to Springfield, VT to register with the Mainly Marathon crew.  Mainly Marathons is a small race company that travels the United States putting on consecutive day races.  They were incredibly organized, detailed, communicative and informative, and though they are REALLY small, I would HIGHLY recommend them to everyone.  The guys do a great job!
The Vermont race was held at Toonerville Trail, a local trail along the Black River, in Springfield, VT.  It was an out & back course in which we did 20 laps.  The Mainly Marathon guys have a system set up where you grab a rubber band and place it on your wrist each time you come back to the timing table.  When you're tired and your mind is wandering, this helps you remember how many laps you've completed.  It sounds primitive ... and it is ... but it works perfectly!  The Mainly Marathon crew also sets up a tent that acts as an aid/fuel/bag drop station near the timing table.   It was a blessing and a curse of sorts.  It was great that I could leave all my stuff there in my bag and just grab what I needed each time I came back for a lap.  But it was SO convenient that I found myself stopping unnecessarily from time to time which added a ton of time to my race.  But it was awesome that it was available. 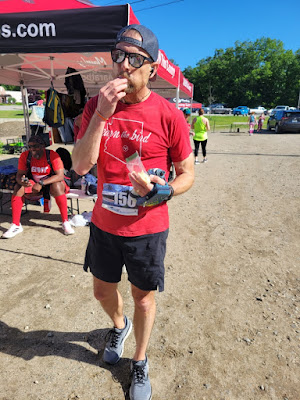 About a quarter mile into the Vermont marathon, it began POURING!!!  I mean it came down for several miles.  It really wasn't that distracting because over half of my long runs during training had been in the rain, but a dry race would've been nice.  Probably the most awesome thing about all of these races was seeing Michael repeatedly on the course because she was competing the half-marathon version of the three straight days.  We would pass and smile and high five, which gave us both energy.
I'd planned on running the races around a nice easy-paced 9:00-9:30, which I did for the most part.  My overall times were much slower because of all the pit stops, but I feel like I managed the paces well to conserve enough energy to get through all three days.  There was really nothing difficult about the first day other than the rain.  It was a pancake flat course and it seemed to fly by.
After the race, the biggest challenge was getting enough fuel back in our bodies and resting up for the next day.  We found a local restaurant for a pasta dinner, and basically hung out at the hotel the remainder of the day, cramming as much of our store-bought fuel into our bodies as they would hold.
Then next morning, we opted for the 5:00 a.m. early start, which meant waking up at about 2:00 a.m., packing, and then driving about 45 minutes to Claremont, New Hampshire, the site of marathon two.  The New Hampshire Marathon was held at Monadnock Park, and consisted of about 18 laps on a shaded, soft trail.  It was only about 60 degrees, but it was incredibly humid, and I began sweating heavily early in mile one.  Losing fluids was a huge concern of mine for this challenge, so I'd began carrying a hand-held water bottle during training.  The extra fluids really helped me hydrate, but I had a huge wardrobe problem on day two. 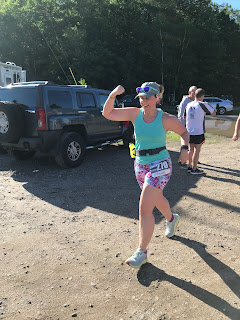 My hips were a little stiff from day one, so I'd opted for compression shorts under my regular running shorts, which I do fairly regularly.  About mile three, the seams on the compression shorts began rubbing a very uncomfortable spot on my upper groin.  I stopped several times to apply Body Glide, but nothing seemed to help.  Eventually, I stopped in the bathroom near the turn around tents, and took them off.  I lost a lot of time messing with them.  But crisis averted, right?  Not exactly.  After that, my regular running shorts decided to begin an attempt to saw my leg off at the groin, near the same spot.  I repeated the same Body Glide routine as earlier, but nothing seemed to work.  So eventually, I found a pair of scissors in a medical kit, and cut the seam out of my shorts since I couldn't take those off too.  This finally remedied the chaffing, but I'd burned up a lot of time.  In fact, when I saw Michael at one point, she said "You need to pick it up buddy", ha.
For all of my training, the middle long run was always the most difficult, mostly mentally.  On the first run I had lots of energy, and on the last run I could see the finish line.  But that "just get through it" middle run was always the toughest.
I finished the New Hampshire leg in a little over 5 hours, thanks to the wardrobe issues.  Going into the challenge, I didn't care much about the times, but 5 hours was a little excessive.  After the race, we gathered our stuff and pointed the rental car back towards Portland, ME.  We were in the car from Claremont, NH to Wells, ME (just south of Portland) for about 2.5 hours, which was rough on tired marathon legs.  We stopped to stretch about every half-hour, but I could've definitely done without the long drive.  We found a local Italian restaurant in Wells, and rested for the remainder of the evening. 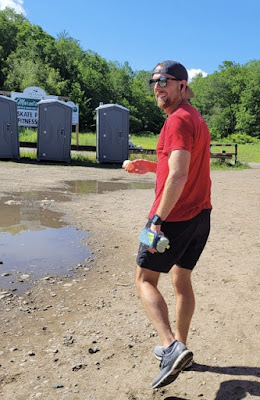 The third and final Maine Marathon was held only about 25 minutes from our hotel.  It was at the Sanford Springvale YMCA, on a paved shaded trail through a neighborhood where we would do 14 laps.  We again opted for the early 5:00 a.m. start.  It was an AMAZINGLY beautiful day in Maine that morning and I couldn't wait to get started.  I knew I was only a few short hours and 26 miles from completing my goal.
My legs were EXTREMELY sore on the third day.  I think most of it was obviously due to the long car ride, but the 52 miles the previous two days probably aided in it too.  It took me about ten miles before I felt like I was running fluidly.  At that point, other than being a little energy depleted, I felt great.  At about mile 18, I saw Michael as she was crossing the finish line.  She was so pumped, and I was SOOO proud of her.  Running isn't as natural for her as it is me, and I know it took a lot for her to accomplish this goal.  Being able to experience it with her was amazing.  My adrenaline was pumping at that point because I was so happy for her, and because I knew I was almost done, and I finished up in about 4:37.
Honestly, running three marathons in three straight days wasn't as hard as I thought it would be.  And  gun to my head, I could have probably got through another one on day four ... but I'm glad I didn't have to try.  We spent the next 4 days in Maine on vacation and had an amazing time.
Completing the three races left me with 11 states left, which save for another pandemic, I'm going to try to complete in two years.  I don't particularly enjoy training for races like this because of the slowed pace, but sitting here a little over a week after the races writing this, I feel great.  The slower paces really helped keep me healthy.  So now, I think I'll go try to run fast again, lol. 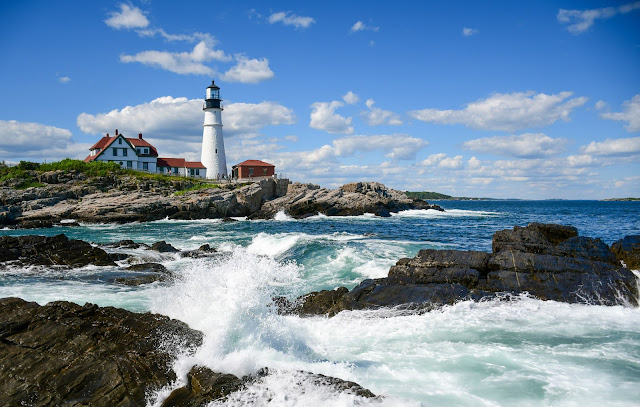