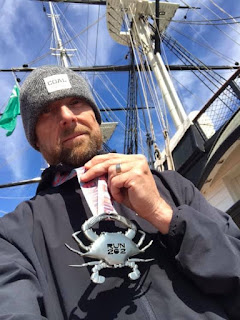 I'm writing this review three months after the race simply to keep my race reviews current, so admittedly, I've forgotten many of the minute details from the event.  But as I think back, the most predominant thing that comes to mind is ... OH THOSE HILLS!!!  It is a very very very hilly race.  The only other marathon I've ran that compares remotely is the Kansas City Marathon.  (I know ... that surprised folks because we're out here in flyover flatland.  But if you run KC, train on all the hills you can find ... you'll need it)  I knew there'd be hills, so I trained for them.  But once you're on the course, you just seem to keep climbing and climbing.  They're pretty relentless. My wife, Michael, had to work in Washington DC the week before the race, so I tagged along and used it as a mini-vacation.  But it wasn't as relaxing as most vacations since I was reminded all week that SHE WASN'T ON VACATION!!!  But I took advantage of the time off and got some shots of the historic DC architecture.  (you can view my photograph at my Flickr page here https://www.flickr.com/photos/weatherlykc/32872784397/in/album-72157706957980551/ ) Here are a few Washington DC shots ...
Anyway ... back to the race.  After Michael wrapped up her work week on Friday, we made our way over to Baltimore ... a little more than an hour drive.  We stayed downtown in the Baltimore waterfront area, which is where all of the post race festivities take place.  Packet pickup was only a few blocks from our hotel at the  Health & Fitness Expo in the Baltimore Convention Center.  So after we picked up our race bibs, we took in some of the sites and sounds of Baltimore downtown.
One of the cool things about blogging and social media over the years is getting to meet new people.  In Baltimore we got to meet Gaby, a fellow runner and social media friend.  On the morning of the race I made my way down to Camden Yards, the home of Major League Baseball's Baltimore Orioles, where the race begins.  I had just shed my warm ups in the bag drop van and was standing in line waiting for the race to start when I heard someone yell my name.  I looked to my right and it was Gaby!  She had met Michael at the beginning of the half-marathon and then made her way to the starting line of my race to wish me luck as well.  We didn't have time to talk, but it was great to see her!

The gun then sounded and we began to run.  Uphill.  Seemingly forever.  As I recall, we made a loop, of sorts, back to the starting line in about the first 8 miles.  After that, we headed out on what seemed to be another loop and a couple of out and backs ... but you should probably refer to the race course map, because I'm trying to remember this 90 days later.  I remember when we looped back around at the 8'ish mile mark, we were near the finish area and there were people everywhere.  It was a nice distraction.  Also, Baltimore is home to the Under Armor headquarters, and we ran by their offices at some point in this time frame.

The Baltimore Running Festival is a very large event with the Marathon and Half-Marathon intermingling at about mile 15 or 16 (I think).  Honestly, this wasn't great.  What had been a fairly wide open marathon course to that point, became Chicago, NYC, or Boston-like congested.  At points we were shoulder to shoulder.  The mix of marathoners with half'ers is never optimal, mainly because of the way the two groups approach races.  It's difficult to explain this without sounding elitist or "uppity" ... but it seems most half-marathoners aren't as aware of race etiquette as the marathoners.  There's a lot of darting from side to side to high-five little kids or grab a shot of beer being handed out.  There's a lot of slamming on the brakes at water stops to grab the first cup they come to.  There's a lot of mid-race selfies.  There's nothing wrong with any of this ... it's just when you're dying at mile 20, and ready to be done, you're just looking for a clear path in front of you without having to dodge people.   But it's completely understandable why races mix the two groups.  It's mostly due to course restrictions and cannot be avoided.  It's just that at Baltimore ... there were soooo many runners.

Even though the race was really hilly and somewhat congested at times, I really enjoyed the race.  All of the water stops were extremely well organized, and the volunteers were very helpful.  I wish I had more details about the race, but it's been awhile since I crossed the finish line.  I can tell you that the bag check retrieval is about a quarter mile from the finish line ... I remember that specifically, lol.  But in spite of the half hour it took to get my gear back, the post race area was huge and awesome.

I would highly recommend the Baltimore Running Festival.  It's very well organized and gives you a wonderful tour of the historic city.  But absolutely be prepared for the hills ... there's a lot them!