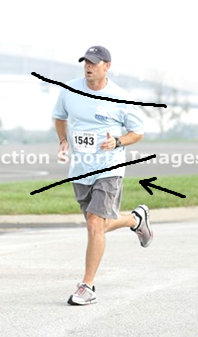 As a 44 year old runner, I'm constantly reminded that my body is simply not what it used to be.  And as we get older, a healthy core including strong and flexible hips is a must.  Strengthening my entire body over the years has made me a much more balanced and efficient athlete, but probably nothing has improved my running more than focusing a lot of my strength training on the areas just below my navel and above mid-thigh.

One huge tell-tale sign of whether or not you've got strong hips is what they do when your lead foot strikes the ground.  If your hips and glutes are weak, they will "collapse".  This means that when your lead foot hits the ground, your hips will tilt - similar to a position when you are standing up with all of your weight leaning on one leg.  In this position, your shoulders will also tilt.  This is because your hips and glutes are not strong enough to support the force of the weight of your body on you front leg as it lands.  The result is often sore IT Bands and other running injuries.  This is often exacerbated if you are a heel-striker. 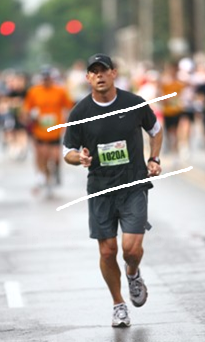 Also, often in this tilted state, while we're swinging the back leg through to the front, the knee on the lead leg will bend inwardly as the body subconsciously attempts to maintain balance and support.  This unnatural inwardly bent knee motion has been linked to pronation and some knee injuries.  In severe cases, the hips will swing noticeably back and forth in a side to side motion with every stride, creating an extreme angle between the hips and the center of gravity.  This is a very inefficient way to run, burning excess energy and increasing the potential for injury.

I love race photos.  Yes I'm a little narcasistic and like looking at myself, but more than that it's just a great way to track my progress as a runner.  Granted, often the photo doesn't reveal everything or give an exact account based on when it was snapped.  But in many cases it reveals little flaws and problem areas in your running form. 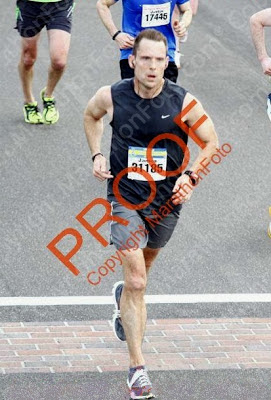 The race photo on the top left is from the 2009 Kansas City Royals 5K.  I've never really struggled with an inwardly bent knee, but my hips used to really collapse at faster paces as evidenced here.  Ideally, the two lines should be parallel to each other, with my hips and shoulders more parallel to the ground.  You can see they are both dipping quite a bit.  It's obvious that my core wasn't strong enough to maintain good running posture when I was running at 5K pace.  And my weak hips basically collapsed, draggin my swing leg through to the front.

The race photo on the right is from the 2010 Kentucky Derby Marathon.  It's a little better, but even though my pace was much slower, the tilted shoulders are still pretty evident  and the hips are still collapsing quite a bit.  My core was much stronger at this point, but my glutes and hips were just not solid enough to support the weight of my body on every stride creating a collapsing effect.  Since my hips couldn't support the load, my thighs attempted to pick up the slack resulting in some IT Band issues I struggled with during that period.

The final race photo on the lower left is from the 2013 Indy 500 Mini-Marathon a few weeks ago.  My core was probably at my strongest ever, and I was able to maintain decent posture throughout the race.  This photo was taken at mile 6 when I was really pressing the pace, but my shoulders and hips are still pretty parallel with the ground and I'm driving my back through to the front in a lifting motion as opposed to a drag.  I still need work, but it's a huge improvement from races just a few years ago.

Parallel hips and shoulders to the ground are evidence for me that a stronger core leads to stronger races.  Of course, to run faster there are many other variables.  But focusing on maintaining good posture while running, as a result of stronger hips and glutes, should make for a stronger and healthier outcome. Yes "Hips Don't Lie" is a Shakira song ... I have no idea why I know that.
... be great today!
Posted by Jim ... 50after40 at 8:53 PM