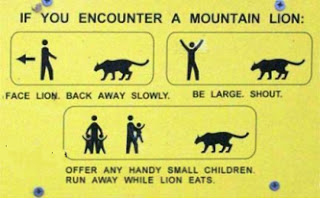 I'm not really a "phobia" guy, but two things terrify me...
1.  Pictures or videos of large ships sinking!
2.  Getting attacked by a mountain lion on a run!
Now, I have no idea about the ship thing - I've never even been on a large boat.  But when I see a ship going down in the water, my metal plate starts to echo and I wanna crawl into the fetal position!  I dunno???
But the mountain lion thing is real man!  Lately there have been more and more mountain lion sightings and shootings in my area.  Last week one was killed about 10 miles from my house. AND I LIVE NOWHERE NEAR THE MOUNTAINS!!!  Listen cats ... I don't hike into your rocky-domain and scare the beans out of you when you're working out - would you kindly stay out' my hood ... PLEASE!

If all mountains lions were like ol' Snagglepuss, no problem - right!  I mean come on, he prances around in cufflinks, a Colonel Sanders Western Tie, and a tall, fake, semi-formal white collar.  Not really outdoor gear dude.  He's also been seen in top hats with a cane ... very classy Snag's.  I don't mean to sound cocky - but "Heaven's to Murgatroid", I don't really see him as a threat.  I'm sure I could outwit him, or at least out-dance him!  His only descent move is the robot.
But actual mountain lions - that's the real deal fella!  For starters - they are sneaky - well, cowardly if you like.  They won't face you like a man - they'll usually jump you from behind.  Also, THEY ARE PISSED!  It's obvious they've been the joke of the animal kingdom for quite some time because of their disproportionately small head.  I mean, big-strong body ... little tiny kitty-kat face.  I don't wanna be too judgemental, but with that size of cranium, they can't be packin' too much of the grey matter. And all that teasing from normal headed animals like grizzlies, mooses, and penguins have them in a very bad mood.﻿﻿
But if I can be serious for a moment - if you do see a mountain lion while running, just try to reason with him.  I mean this poor little fellow has obviously stopped taking his medication and wandered away from home.  Just speak to him like an adult, offer him a Skittle or your arm, and calmly lead him back to Colorado.  You'll both be in stitches, laughing about the crazy mix-up in no time!  (Well, one of you will be in stitches and the other laughing!)
Run faster ... Be great today!
Posted by Jim ... 50after40 at 4:15 AM